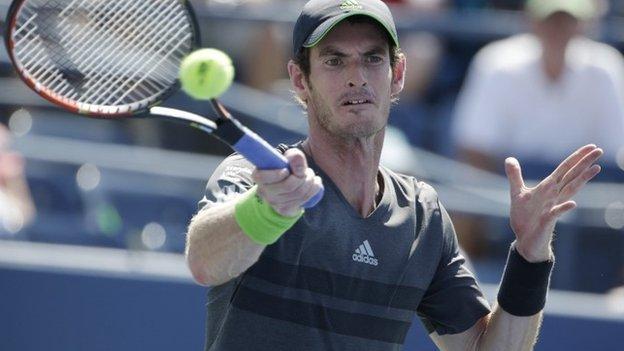 Andy Murray said his body let him down as he suffered with cramp in his opening match against Robin Haase at the US Open.

However, he struggled physically from the start of the third set and was in danger of a shock first-round exit inside Louis Armstrong Stadium.

After two sets of tennis that were far from perfect, but good enough for the occasion, Murray's body - in his own words - failed him.

The cause of the cramp remains a mystery, although Murray says he may consult a nutritionist before the second round.

He doesn't think nervous tension was an issue, and believes he's not been in such good shape since last year's Wimbledon.

He showed enormous courage to win in four sets, but won't have struck fear into the hearts of title rivals.

"I was in a good position, and then my body failed me," Murray told BBC Sport.

"I panicked, because you don't know what to do. I got broken at the beginning of that third set, and you think: 'What do I do? Do I try to conserve energy or do I try to finish it in three sets?'

"I don't really know how I managed to get through."

Murray, 27, said he felt cramping in several parts of his body and he was unable to serve at much over a tame 100mph in the third and fourth sets.

"That's what was worrying about it, is it came after such a short time.

"I've played four-and-a-half, five-hour matches and felt pretty awful afterwards, but not after an hour and a half."

With nerves and physical conditioning apparently not behind the issue, Murray plans to look for other explanations ahead of his next match.

"Maybe I'll speak to a nutritionist and look at what I had eaten the last three, four days," he said.

"I don't think I was that dehydrated, because I needed to go to the toilet when I got off the court.

"I don't know exactly what happened, but I will try to get to the bottom of it before I play again."

Haase, the world number 70, had his own physical issues to deal with and was unhappy that he was not allowed treatment for a foot problem.

"I wanted to get treatment and I didn't get it," said the Dutchman.

"I've never heard before that the physio can deny treatment, or just say 'I will get the doctor and at the next changeover you will get a pill'.

"The trainer saw me and he tells me that a pill is enough. If I ask for treatment, I should get treatment."

Murray will play German qualifier Matthias Bachinger in the second round on Wednesday or Thursday.