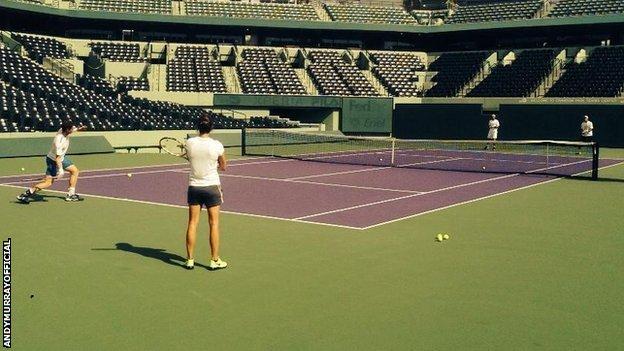 Andy Murray is set to retain Amelie Mauresmo as his new coach.

The Briton announced the link-up with the French former Wimbledon champion shortly before the grass-court season.

They held talks after Murray, 27, was beaten in the Wimbledon quarter-finals by Grigor Dimitrov, which saw him drop to 10th in the world rankings.

Photographs of Mauresmo at Murray's training camp in Miami suggest the partnership will continue, with an announcement expected in the next week.

Mauresmo, 34, had pledged not to make any major changes to Murray's game ahead of the defence of both his Queen's and Wimbledon titles this summer.

However, Murray admitted he needed to make improvements to his game following the straight-sets defeat by Dimitrov.

Murray had made it clear he would like to continue working with the former world number one, who also won the Australian Open during her career.

Murray had been without a coach since the departure of Ivan Lendl in March, with the pair having worked together for two years in which the Scot won Olympic gold, the 2012 US Open and last year's Wimbledon.