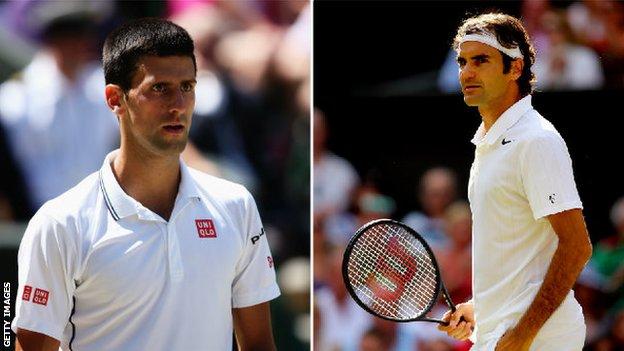 Roger Federer will attempt to win a record eighth Wimbledon title when he meets Novak Djokovic in Sunday's final.

The 32-year-old Swiss, who claimed his last crown in 2012, is tied on seven wins with American Pete Sampras and Briton William Renshaw.

Number one seed Djokovic, the champion in 2011, was beaten in last year's final by Andy Murray.

The Serb will replace Rafael Nadal as the world number one if he wins a seventh Grand Slam title.

There was a point on Wednesday afternoon, men's quarter-finals day, that appeared to be signalling the end of a decade-long four-way powershare at the top of men's tennis.

Rafael Nadal had been beaten the previous day, defending champion Andy Murray had just gone out and both Roger Federer and Novak Djokovic were struggling in their last-eight ties.

A new era? Not yet. Both Federer and Djokovic fought back, then dispatched young pretenders Milos Raonic and Grigor Dimitrov in their respective semi-finals.

For Federer, a run to a ninth Wimbledon final comes 12 months after he was beaten in the second round by Sergiy Stakhovsky and presents the opportunity to add to his record haul of 17 Grand Slam titles.

In the same half of the draw as Nadal - an obstacle removed by Nick Kyrgios's shock win - Federer has had to overcome Australian Open champion Stanislas Wawrinka and big-serving Canadian Raonic.

Wawrinka, who arrived at SW19 as the Swiss number one, is the only player to have taken a set off Federer at this year's Championships, while Raonic was brushed aside by an imperious display from the world number four.

That continued Federer's unbeaten run in eight Wimbledon semi-finals and booked a meeting with Djokovic, who he defeated in the 2007 US Open final, their only previous Grand Slam decider.

Djokovic, the world number two, arrived at Wimbledon having not played a grass-court warm-up event but has advanced to his third final in four years.

However, he had a more testing route to the final than Federer, spending 15 hours on court to the fourth seed's 10.

Four sets were needed to defeat Radek Stepanek in round two, while it took five - including coming from 2-1 down - to get past Marin Cilic in the quarter-finals.

Djokovic was then pushed by Murray's conqueror Dimitrov, taken to four sets in his third match to last longer than three hours in the Championships. In contrast, Federer has only once been taken longer than two.

Still, even though Federer leads the career head-to-head 18-16, Djokovic has won 10 of the previous 15 meetings.

However, Federer has won their only Wimbledon clash and Djokovic is looking to avoid a record-equalling fourth successive Grand Slam final loss in the Open era.

Djokovic: "Every rivalry that I have with these guys is special and unique in its own way. Of course, I respect Roger and everything he has achieved in his career as a player. To come back and play finals of Wimbledon again, it's incredible what he's doing. But, again, when we come to the court, that ends. I'm there to win, whoever is across the net.

"The key against him in the game is trying to not allow him to dictate too much because he likes to be very aggressive, he likes to come to the net. I'm going to have to be able to get as many returns back in the court and try to also stay closer to the line, protect the baseline."

Federer: "We didn't come through the rankings together, so I was established while he was coming up. We saw each other in a different light than we see each other today when we're both ranked high, we both achieved a lot. Things have clearly changed over time. Ever since he's won Grand Slams and became world number one, it's been a cool rivalry.

"His forehand, his serve, his movement is what stands out the most at this moment now. He's really been able to improve that and make it rock solid. It's really important to stay aggressive against him."

For all the intrigue on the court, there will be just as much in the players' box as two multiple Wimbledon champions once again lock horns.

Both men have been present throughout the two weeks of the Championships, once again taking to the courts on which they played three successive finals against each other between 1988 and 1990.

Becker was successful in 1989, sandwiched in between Edberg's two wins, the second of which was won in a five-set classic.

Djokovic-Federer is not the only finale taking place on Sunday, with a Briton hoping for success at SW19.

Jordanne Whiley partners Japan's Yui Kamiji in the final of the ladies' wheelchair doubles, taking on the Dutch pair of Jiske Griffioen and Aniek van Koot.

And the final match to be played on Centre Court of the 2014 Championships will be the mixed doubles final. Nenad Zimonjic and Samantha Stosur meet Max Mirnyi and Hao-Ching Chan.

Two-time Wimbledon champion Jimmy Connors: Djokovic/Federer final - champions not ready to move over for the "young guns". Rest up guys - Wimbledon Championship on the line.