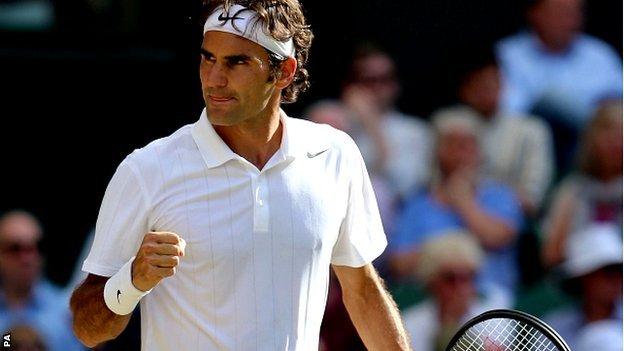 He will take on top seed Novak Djokovic in Sunday's final, after in four sets.

Federer is trying to win his 18th Grand Slam title, and his first since beating Andy Murray at Wimbledon in 2012.

Fifteen years after making his first appearance at the All England Club, Federer has the chance to extend the record he has already set for major victories and break new ground for Wimbledon titles in the men's game.

"That was a big victory," said the Swiss, who lost in the second round last year. "I really had to focus on every point. I know that is always the case at this stage but it was hard.

"I had to be very careful on my service games and I knew there were only going to be a few chances on his serve, but I am very, very happy.

"I played some great tennis under pressure at times because I didn't play well here last year, and I expect a lot of myself. In the second week I have played better as the week has gone on.

"Now I can look forward to another great match with Novak."

Raonic had made history just by reaching the last four, as the first Canadian man to do so, but suggestions the 23-year-old was ready to strike a blow for the younger generation proved misguided.

The difference in experience was vast, with Federer playing in his 35th Grand Slam semi-final and unbeaten in eight previous Wimbledon semi-finals.

Moving superbly, attacking the net when possible and patiently waiting for his chances on the return, the Swiss looked as sharp as ever on the familiar ground of Centre Court.

Raonic topped the standings for aces going into the semi-final, hit the second-fastest serve of the tournament at 141mph and dropped serve just twice.

But despite lacking his opponent's raw power, Federer had only been broken once and he offered up just a single break point as he dominated the match.

He got a huge boost with an immediate break following a double fault and an error from Raonic, and calmly served his way out of trouble at 4-3 on his way to clinching the set.

There was the expected flow of huge Raonic serves as the second set sped by, before Federer made his move at 4-4.

A sweeping backhand down the line put the pressure on at 0-30 and Raonic succumbed with a wayward smash, allowing Federer to arrow another backhand winner.

The pattern repeated itself at 4-4 in the third, when Raonic opened with a double fault and soon found himself at 0-40, thumping a forehand over the baseline on the second break point.

Federer drew a gasp from the 15,000 spectators with an unexpectedly rash forehand drive-volley when trying to close out the match, but a forehand into the corner brought up match point and a big serve finished the job.