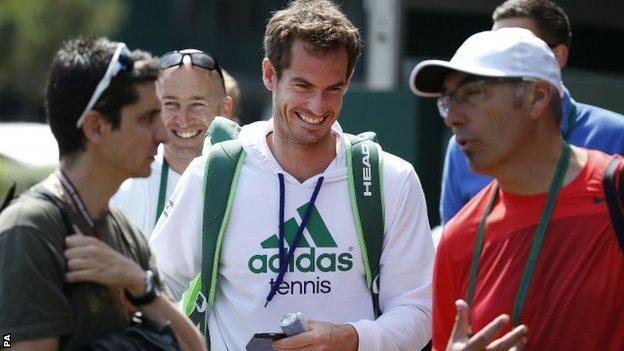 Defending champion Andy Murray can move to within two matches of retaining his Wimbledon title with victory over the in-form Grigor Dimitrov on Wednesday.

The British number one is joined in quarter-final action by former champions Novak Djokovic and Roger Federer - along with Australian Open champion Stan Wawrinka, big-serving Canadian Milos Raonic and the conqueror of Rafael Nadal, Nick Kyrgios.

Simona Halep has been one of the best - and most consistent - players over the past 18 months.

Ranked 47th in the world at the start of 2013, the 22-year-old Romanian has won seven titles since and is now the world number three.

She is beginning to find her form at Grand Slams too, reaching the last 16 of the 2013 US Open, the quarter-finals of the Australian Open and the final at Roland Garros.

Lisicki has a formidable pedigree at the All England Club, though. The German may be seeded 19th but, as well as losing last year's final to Marion Bartoli, she reached the last four in 2011 and the last eight in 2009 and 2012.

The winner of Halep and Lisicki's meeting will play Eugenie Bouchard or Angelique Kerber in Thursday's semi-final.

Canadian Bouchard, 20, is the only woman to reach the last four of the two Grand Slams so far in 2014, and can also draw on the experience of winning the junior title at SW19 in 2012.

Kerber, the world number seven, reached the semi-finals in 2012 and eliminated Maria Sharapova in the last round.

Can Murray extend his 17-match winning streak on the grass courts of SW19 against the Queen's Club champion?

Murray leads the head-to-heads 3-1, but the Bulgarian won their last meeting on hard courts in Mexico in March.

Stan Wawrinka may have usurped fellow Swiss Roger Federer in the world rankings, but the seven-time Wimbledon champion will be desperate to reassert his supremacy on the court where he is the undisputed king.

The fourth seed is looking to become the first man to win eight singles titles, while Wawrinka is competing in the last eight at SW19 for the first time.

Wawrinka concedes that playing a fully-fit and confident Federer at Wimbledon is "one of the biggest challenges in tennis".

The form book suggests only one winner in the clash between Novak Djokovic and Marin Cilic, with the Serb top seed having beaten his opponent in all nine of their previous meetings.

But Cilic is playing well, having knocked out Tomas Berdych in the second round, and has lost only two sets in reaching his first Wimbledon quarter-final.

He is back less than 24 hours later to take on Canadian Raonic. They have hit more aces - Kyrgios with 113 and Raonic 108 - than any other player left in the men's draw.

As Wimbledon goes deep into the second week, the outside courts become more about the doubles.

Court two is the place to be on Wednesday as Bob and Mike Bryan, the defending champions and most successful men's pair of all time, are in quarter-final action against Julian Knowle and Marcelo Melo.

That match is second on court, preceded by women's second seed Sara Errani and Roberto Vinci of Italy taking on Shuko Aoyama and Renata Voracova in the third round.

By beating Rafael Nadal on Tuesday, world number 144 Nick Kyrgios became the first player ranked outside the world's top 100 to defeat a world number one since Andrei Olhovskiy shocked Jim Courier in the third round at Wimbledon in 1992.