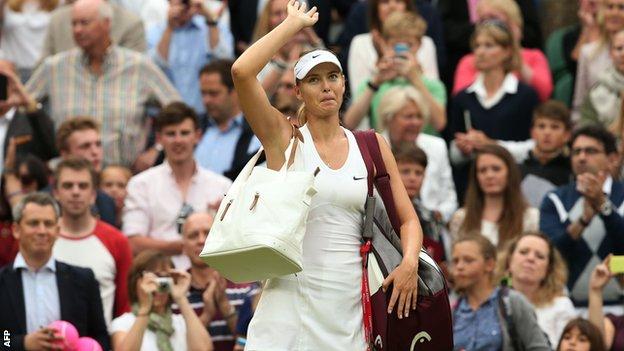 Former champion Maria Sharapova is one of the players with catching up to do at Wimbledon on Tuesday after Saturday and Monday's rain.

Sharapova's fourth-round match with Angelique Kerber has been held over from Monday to be played on what is traditionally women's quarter-finals day.

Two women's last-eight ties will take place, while Roger Federer, Rafael Nadal and Stanislas Wawrinka will all be in fourth-round action in the men's draw.

This should have been played last on Court One on Monday, but the players did not even get out of the locker room following rain delays.

Sharapova, 10 years on from winning the Wimbledon title as a 17-year-old, has lost only seven games in getting to the last 16.

Kerber, the world number seven, reached the semi-finals in 2012. The winner of this tie will play Canada's Eugenie Bouchard in the quarter-finals.

One of the two quarter-finals being played on Tuesday sees Petra Kvitova, the highest seed left in the bottom half of the draw, continue her bid for a second Wimbledon title.

Kvitova, the champion in 2011, dropped just five games as she beat Shuai Peng to progress to the quarter-finals for the fifth successive year.

Barbora Zahlavova Strycova is in the quarter-finals of a Grand Slam for the first time following victory over 16th seed Caroline Wozniacki.

Russian Makarova saw off fourth seed Agnieszka Radwanska to continue what is already her best run at the All England Club, having previously never been past the third round.

The winner of this tie will meet Kvitova or Zahlavova Strycova in the semi-finals.

Seven-time Wimbledon champion Roger Federer has had two days off since beating Santiago Giraldo for the loss of just seven games in the third round.

The Swiss number two will play Tommy Robredo, who went five sets with 15th Jerzy Janowicz and is playing in the fourth round at Wimbledon for the first time in 13 attempts.

Two-time Wimbledon champion Rafael Nadal has dropped the opening set in each of his three matches at Wimbledon this year before going on to win in four sets.

The Spaniard, who beat Mikhail Kukushkin in the last round, will play Australian Nick Kyrgios, the world number 144, who has been tipped as the "future of tennis" by 1987 Wimbledon champion Pat Cash.

Australian Open champion Stanislas Wawrinka has been outspoken about a schedule that will see him play three matches in three days if he reaches the quarter-finals.

After beating Denis Istomin in straight sets in round three on Monday, Wawrinka said: "If the player starts to talk to the referee about scheduling, they never change the decision. They just take decision and you have to accept it."

Feliciano Lopez shocked ninth seed John Isner on Monday in a four-set match that contained only one break of serve. Lopez's crucial break in the fourth set came after 46 consecutive holds. 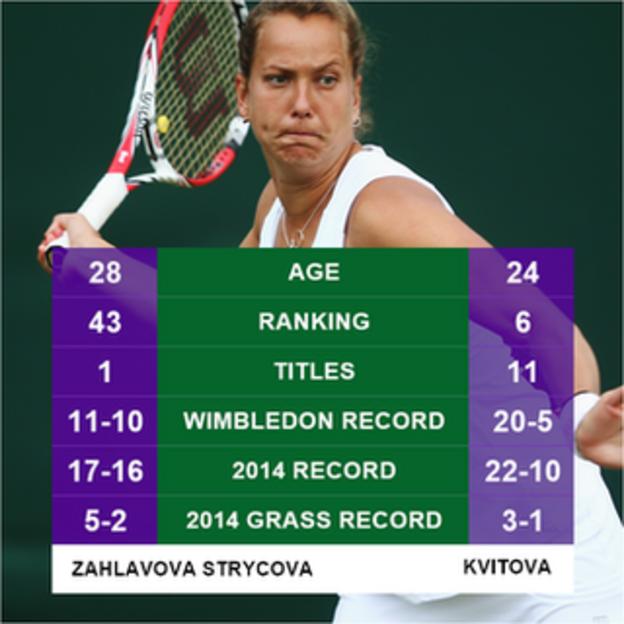 Barbora Zahlavova Strycova is enjoying her career-best run in a Grand Slam at this year's tournament, having beaten second seed Li Na in the third round.

The Czech player, ranked 43 in the world, arrived at Wimbledon in good form by reaching the final of the Aegon Classic in Birmingham, losing out to Ana Ivanovic.

The 28-year-old, who has yet to drop a set at the All England Club this year, has also beaten 32nd seed Elena Vesnina and former world number one Caroline Wozniacki.

Her meeting with Kvitova ensures a Czech player will reach the semi-finals and, if Lucie Safarova wins her quarter-final, a Czech will definitely be in the final.

Simona Halep, at three, is the highest seed left in the women's draw. The Romanian, who reached the French Open final, meets Zarina Diyas in the first match on Court Two for a place in the quarter-finals.

In the men's draw, eighth seed Milos Raonic takes on 10th seed Kei Nishikori at the same stage of the tournament after beating Lukasz Kubot in straight sets.

Nishikori, the highest ranked Japanese men's player of all time, had to work harder, needing five sets to beat Simon Bolelli of Italy to reach the last 16 of Wimbledon for the first time.

What about the weather?

Ah yes. It's all very well having these plans, but will they be ruined by the rain? According to BBC Weather, Tuesday looks set to be a marked improvement on the showers that have ruined much of Saturday and Monday.

If all the scheduled play is completed on Tuesday, Wednesday would see the final two women's quarter-finals played alongside four men's last-eight matches.

Following the exit of John Isner, who was the last remaining American player in the third round at 2014 Wimbledon, no American men or women are through to the round of 16 at Wimbledon for the first time since 1911. 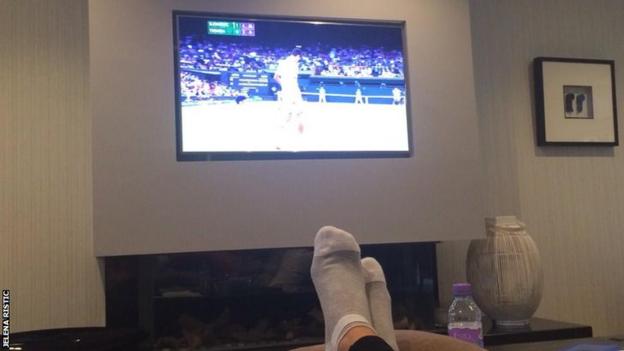 Defending Andy Murray, who has yet to drop a set in this year's tournament, has a day off ahead of his quarter-final against Grigor Dimitrov on Wednesday.

The Briton despatched South African Kevin Anderson in straight sets to reach the last eight for the seventh successive year.

If Murray beats Dimitrov, his route to the final, based on seedings, would continue with Djokovic in the semi-finals and Rafael Nadal in the final.