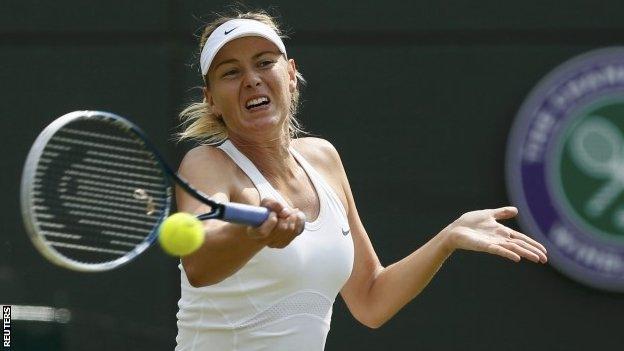 Former champions Maria Sharapova and Serena Williams both eased into the women's second round at Wimbledon.

The Estonian, who reached the quarter-finals last year, won 6-3 6-2.

Sharapova, who will next face Switzerland's Timea Bacsinszky, was pleased to be off to a flying start on the grass after finishing her clay-court season by winning her second French Open title.

"It's such a quick turnaround," she said. "You just want to be physically rested but also have enough preparation and practice going into Wimbledon; it's a thin line. But I've recovered mentally and physically."

Williams, who had beaten Tatishvili in their two previous meetings, was also pleased with her relatively comfortable progress.

"Last time I played her, she ended the match by making it really tough. Today, she started where she finished in that match. She can hit the ball really hard, but I was ready for that," she told BBC Sport.

"I fell so many times during the match, which was weird but it was probably just a case of getting my bearings. I didn't play much grass-court tennis last year. I think I'll be OK."

The 16th-seeded Dane led her Israeli opponent 6-3 2-0 overnight and won four straight games on the resumption to go through.

"I don't really know much about her [Broady]," admitted Wozniacki. "So I'll have to have my team do a little bit of research and some scouting."

"The first match is always tough and I was a bit nervous and probably didn't play my best tennis but I fought it out," said Bouchard, a former Wimbledon junior singles and doubles champion.

"Daniela is a really good player and she didn't give me many chances and I wasn't as aggressive as I probably might have been."

Lisicki opened proceedings on Centre Court after defending champion Marion Bartoli, who has subsequently retired, performed the coin toss for the match as part of a ceremony that included a tribute to the late Elena Baltacha, the former British number one who died from liver cancer in May.

"It was such a huge honour to play out there in the first match. I was very thankful for that and for the support of fans," the 24-year-old German said afterwards.

"It was a very special moment at the start; it was great to see Marion Bartoli out there and to have the chance to pay tribute to Elena Baltacha as well.

"When I stepped out on to court, I was quite nervous but the crowd helped me settled down. This is such a special place; it gives me confidence and I always enjoy playing here."

Ninth seed Angelique Kerber also went through to a meeting with Britain's Heather Watson after the 2012 semi-finalist defeated Urszula Radwanska of Poland 6-2 6-4 while unseeded American Madison Keys, who beat Kerber in the final at Eastbourne, made a winning start by overcoming Monica Puig of Puerto Rico 6-3 6-3.

One seed to fall was Russian Svetlana Kuznetsova, the 28th seed, who was beaten 3-6 6-3 6-1 by Michelle Larcher de Brito. The Portuguese 21-year-old upset Sharapova in the second round last year and reached the semi-finals at Nottingham earlier this month.