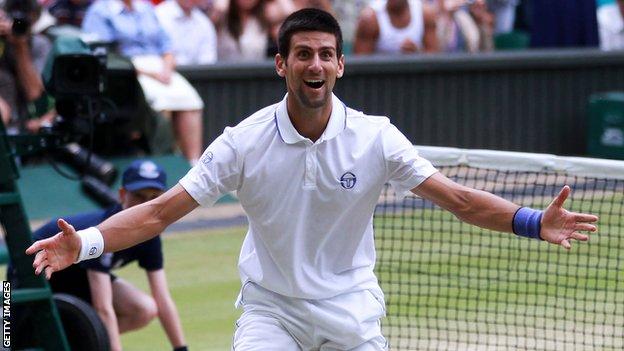 Top seed Novak Djokovic will be looking to tap into the experience of coach Boris Becker as he tries to end his Grand Slam drought at Wimbledon.

The Serb, 27, has not won a major title since the 2013 Australian Open, and has since lost in three Slam finals.

Becker joined his team in January, and Djokovic hopes the three-time champion can help him end that run.

"It's one of the reasons why Boris is on board," said Djokovic, who won Wimbledon in 2011.

"He is somebody who was a multiple Grand Slam winner and a world number one.

"He can definitely identify himself through my own course of life and experience and career. So we're working on it. It's a process that takes a little bit of time."

Becker, 46, won three of his six Grand Slam titles at Wimbledon, but since teaming up with Djokovic in January has seen the Serb lose in the Australian Open quarter-finals and the French Open final.

Djokovic said defeat in Paris was "not the first or the last final that I lost", adding: "I have to keep on moving.

"I have to try to improve myself not just on the court, but understand well the mental aspect, what is happening in those finals, why I have not been able to win a Grand Slam title in the last couple of years."

Seven-time champion Roger Federer arrives at Wimbledon in better shape than in 2013, when a back injury hampered him throughout the season.

"I feel I have a very good chance again this year," he said.

"I hope to utilise my fitness, the amount of matches I've played this year. So I'm really coming in with a much better feeling than maybe in the last year."

World number one Rafael Nadal also made an early exit in 2013, his first-round defeat by Steve Darcis following a second-round loss to Lukas Rosol in 2012.

"It is really the most dangerous tournament of the year," said the Spaniard, champion in 2008 and 2010.

"It is a tournament you arrive to the first round, sometimes the match cannot be in your hands, because in the end it's a surface that you don't have the time to control the match."

Maria Sharapova, 27, returns to the All England Club 10 years after her first and, to date, only victory.

The Russian, who won her second French Open title two weeks ago, said: "I don't like to come into this tournament thinking, 'I just won a Grand Slam.' I like to challenge myself and be hungry.

"I don't want to think about what happened two weeks ago. I want to start from scratch."

Top seed Serena Williams lost in the fourth round in Paris and, asked how long it had taken to get over that defeat, responded: "Who says I was over it?"

The 32-year-old American, a five-time Wimbledon champion, added: "I feel good. When I came here, I just felt a sense of being home. I really like being here."

Check out the full men's and women's draws on the BBC Sport tennis index.