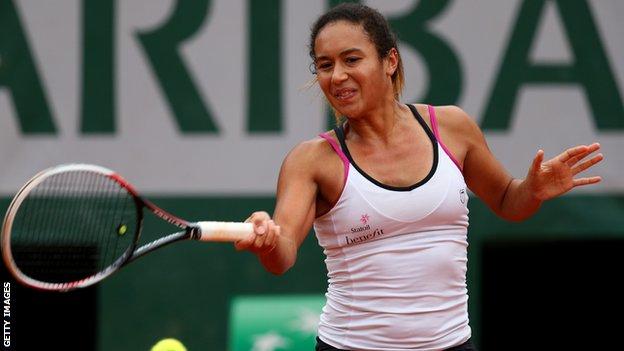 Heather Watson has reclaimed the British number one ranking from Laura Robson.

The 22-year-old from Guernsey has moved up 23 places to number 69 in the WTA rankings after last month.

Her exit ended a nine-game winning streak which saw her after missing almost two months with a shoulder injury.

Robson, 20, has only played once this year after

Despite that Robson, has moved up three places to number 80 in the world.

Watson, whose career-high ranking of 39 came in February last year, and Konta will play in this week's Aegon Classic in Birmingham as the grass-court season begins.

The pair will meet in the second round if Watson beats Canadian qualifier Aleksandra Wozniak, and Konta gets the better of Japan's Kurumi Nara.

In the men's rankings, Andy Murray has moved up three places to world number five, Dan Evans has dropped five places to 139 and James Ward is up 13 spots to 155.