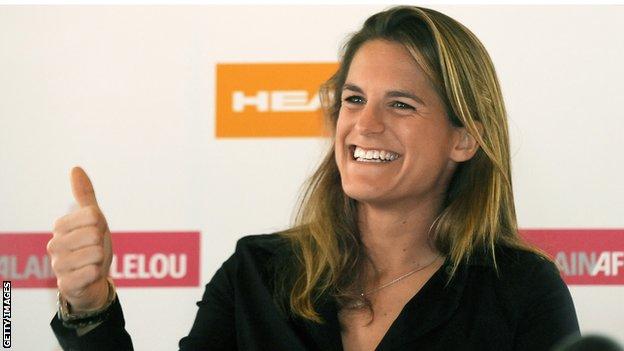 Amelie Mauresmo says she is not concerned about working with a leading male tennis player after being named as Andy Murray's new coach.

It was confirmed on Sunday that the Frenchwoman, 34, will take up the role, initially for the grass-court season.

The first female coach of a Grand Slam-winning man in recent years, she said: "That's not my big concern right now.

"I want to help Andy. It's the only thing that I have in mind right now."

Mauresmo said she had been "surprised by the approach" from Murray and was targeting winning more major titles with the Briton.

We all know his mother was a big part of his tennis career. I think he's maybe looking for something different, about emotions and sensitive things

She added: "I'm looking forward to getting down to work and helping him win more Grand Slams."

In a highly successful career she was ranked world number one for a total of 39 weeks, won Wimbledon and the Australian Open, both in 2006, and is the captain of the French Fed Cup team.

She was also a key influence on French player Marion Bartoli's Wimbledon triumph last year, and has experience of coaching a man after spending the 2010 grass-court season with France's Michael Llodra.

"It's a professional goal for me - this is what I'm interested in."

She added: "It's probably something that have to you ask Murray at some point, why he made this choice. We all know his mother was a big part of his tennis career.

"I think he's maybe looking for something different, about emotions and sensitive things."

Murray, 27, was coached in his early years by his mother, Judy, a strong advocate of raising the number of female coaches in Britain.

Jimmy Connors and Marat Safin were other Grand Slam winners of the past to have worked with their mothers in the formative years of their careers.

Mauresmo takes over from Ivan Lendl, who left the role in March after guiding Murray to his first Grand Slam titles at the 2012 US Open and last year's Wimbledon.

Lendl was unable to commit to enough time with Murray, and Mauresmo does not expect to travel with the Scot every week, saying: "I don't want to work full-time. If it's half a year, that's not bad."

She is clear about the high expectations that will surround working with such a high-profile player.

"It's quite easy for me to answer this, and he's very open on this," she said. "He wants to win more Grand Slams, so I guess that's what it is."

Mauresmo revealed that Murray had first made contact with her a few weeks ago and, although the initial agreement is until the end of Wimbledon next month, they are looking at a longer partnership.

"We want to do something in the mid-term because, you know, miracles don't happen, not overnight," she said.

"Even though you can give him new dynamics, it will not happen overnight."

Mauresmo will remain as the French Fed Cup captain, with their next tie a World Group quarter-final against Italy next February.