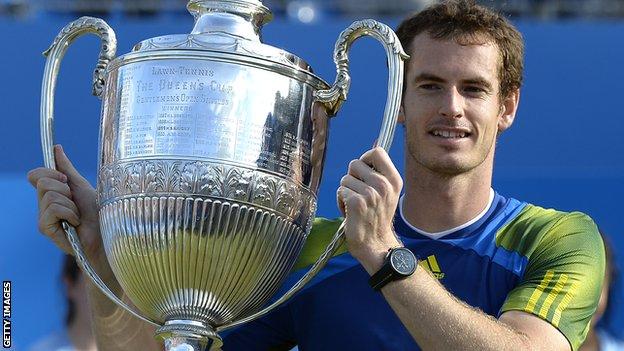 Andy Murray will begin his grass-court season against Paul-Henri Mathieu at the Aegon Championships on Wednesday.

Murray, Britain's first men's singles Wimbledon champion since Fred Perry in 1936, was given a first-round bye at Queen's Club.

France's Mathieu, the world number 90, earned a 7-6 6-4 win over Aljaz Bedene to book a meeting with defending champion Murray.

Third seed Murray could face Australian Bernard Tomic in the third round.

Murray, who appointed Amelie Mauresmo as his new coach on Sunday, has won the Queen's tournament three times.

"I always enjoy coming back here," said the 27-year-old, whose first win on the ATP World Tour was at Queen's in 2005.

"It's great preparation coming up to Wimbledon and they have a fantastic field again this year.

"I've had some great years here and some years haven't gone so well, but last year everything worked out perfectly. It was the start of the best summer of my tennis career. I'm excited to get going."

Murray will be looking to bounce back from his 6-3 6-2 6-1 defeat by world number one Rafael Nadal in the semi-finals of the French Open.

Queen's top seed Stanislas Wawrinka also gets a bye along with the other top eight seeds, but will meet 2006 Wimbledon semi-finalist Marcos Baghdatis in the second round if the Cypriot gets past Bradley Klein in round one.

British wildcards James Ward and Dan Evans both won their first-round matches on Monday to join Murray in the next stage.