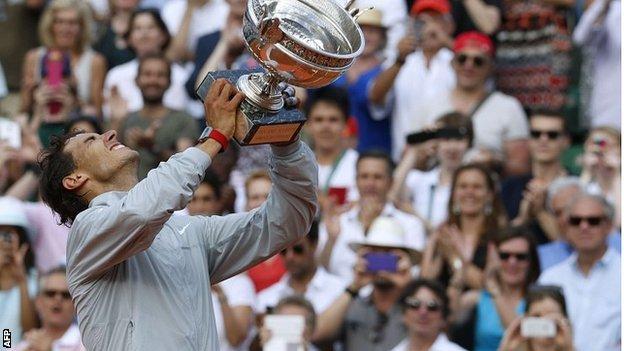 Rafael Nadal saw off the threat of Novak Djokovic for another year to win his ninth French Open title and a record fifth in succession.

Nadal is the first man ever to win a major title nine times, taking his Grand Slam total to 14.

The victory also means he will remain world number one ahead of Djokovic.

"In matches like this every moment is crucial. Playing against Novak is always a big challenge, I had lost against him the last four times," Nadal said on court.

"I feel sorry for him today, he deserves to win this tournament."

It is the third year in a row that Nadal has ended Djokovic's hopes of winning the one Grand Slam title he lacks, with the Serb in particular struggling on a stifling Parisian afternoon and ending with a double fault on match point.

"Congratulations to Rafa and his team, it is incredible to win this tournament nine times," Djokovic said.

"It was an emotional day. I have tried with all my power, my strength, my capacities but Rafa was the strongest on court."

Nadal extended his incredible run at Roland Garros to 66 wins and just one defeat in the last 10 years.

That record looked under threat when he dropped the first set as his usually fearsome forehand let him down, five errors handing Djokovic the initiative.

"Never mind the back problems he had in Australia and the error-strewn performances of the early clay court season - Rafael Nadal once again timed his run to perfection at Roland Garros. It was a brutal scrap at times, but Nadal looked like he would be very hard to beat after wrestling the momentum away from Djokovic midway through the second set.

"The Spaniard is just 67 days older than Roger Federer was when he won his 14th Grand Slam title: his claim last week that a generation is walking away now looks exceedingly premature."

Both men were having to work hard in temperatures of around 27C, and Djokovic was the first to ask for iced towels to wrap around his neck at the changeovers.

Nadal finally made his move when he broke for 4-2, only to lose his advantage straight away as the nervous errors returned in the following game.

Djokovic had won their last four matches but taking on Nadal in a five-set contest on Court Philippe Chatrier is a very different kind of test.

The 27-year-old Serb faltered badly with a tie-break in sight, offering up a double fault and a forehand error before Nadal smacked a forehand winner to level the score.

It was a huge blow to Djokovic's hopes and he faded further in the third set.

After dumping a straightforward volley in the net to lose serve in game two, the second seed took some tablets at a changeover in an attempt to improve his condition.

Nadal scented victory once again, breaking twice on his way to the set and leaving Djokovic to stare in disbelief at coach Boris Becker in the stands after one error.

Another poor volley and a wild backhand into the tramlines saw Djokovic fall 4-2 down in the fourth, but Nadal was now having his own issues, bending over apparently in some discomfort and badly mistiming a smash to give the break straight back.

With cloud cover giving Djokovic some respite from the sun, he was showing signs of launching a renewed assault only to falter with his opponent under pressure.

A terrific backhand pass helped Nadal to match point and Djokovic, disrupted by a call from the crowd, fired his second serve long to leave the Spaniard on his knees in his familiar celebratory pose.