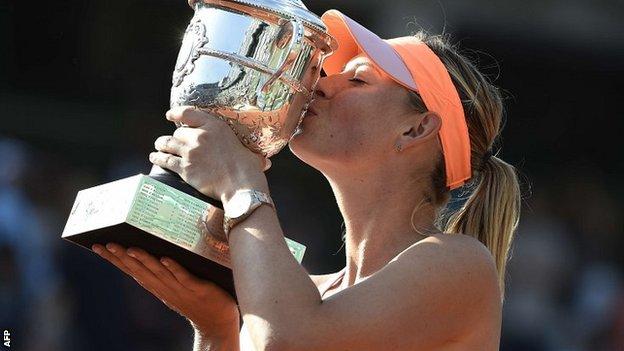 Maria Sharapova drew on her fighting spirit once again to beat Simona Halep in a dramatic final and win her second French Open title.

"Halep will have gained so much from this experience, and there should be no recriminations about the way the final two games unfolded.

"Sharapova had produced her best tennis of the fortnight in the first set and a half and her emotion in victory soon became apparent. Recurrent shoulder problems cast another dark shadow over her career just last year and she's now won a second Grand Slam title on a surface she feared she would never master."

It was the fourth match in a row that saw Sharapova clinch victory in a final set.

She has now won five Grand Slam titles, taking her to joint-11th on the Open era list alongside Martina Hingis.

"This is the toughest Grand Slam final I have ever played and all respect to Simona, she played an unbelievable match today," said Sharapova.

Halep, 22, might have been playing in her first Grand Slam final but she pushed the 2012 champion to the limit.

Sharapova had been a study in intensity throughout the fortnight in Paris, happy to take on the mantle of favourite after Serena Williams' early exit, and in the end her will to win pulled her through as much as her ability.

Five games in a row put her in control of a high-quality first set that lasted 57 minutes, as her weight of shot just held the balance of power over Halep's speed of foot.

But the Romanian fourth seed was fighting back in the latter stages and did so again in the second set, the pace and angles she created keeping Sharapova off balance.

Halep won a stunning rally at 4-4, deuce, that had the crowd chanting "Simona! Simona!" - not for the last time - but she was broken straight back thanks to a cruel net cord and it came down to a tie-break.

It looked as though the experience of Sharapova, playing in her ninth Grand Slam final, was about to tell when she moved 5-3 ahead, but under constant pressure from Halep she produced four errors in a row.

For the first time since 2001, the French Open women's final would require a final set, and the Court Philippe Chatrier erupted as they played on into a third hour.

There was a time violation for Sharapova early in the decider as her fragile serve became an ever-lengthier process, and she let a lead slip for the second time in the set with a double fault at 4-3.

Halep might have felt it was her moment, but Sharapova has learnt to move on swiftly from such errors.

She played a brilliant return game, backhand and forehand winners taking her 5-4 in front, and as the match time passed three hours dug deep to at last find a clinical service game.

The Russian thumped away a drive volley to earn three match points and then sent down a serve that Halep could only return into the tramlines, as Sharapova willed it to drop wide.

"It's such an emotional victory for me in my career," added Sharapova.

"I have been in many Grand Slam finals, and every one feels very different. As I get older I appreciate those situations so much more."

Halep admitted: "It was really tough before the match to manage the emotions. It was a big match for me. The first final of a Grand Slam.

"I tried just to stay relaxed, to say that it's a normal final, like a small tournament."