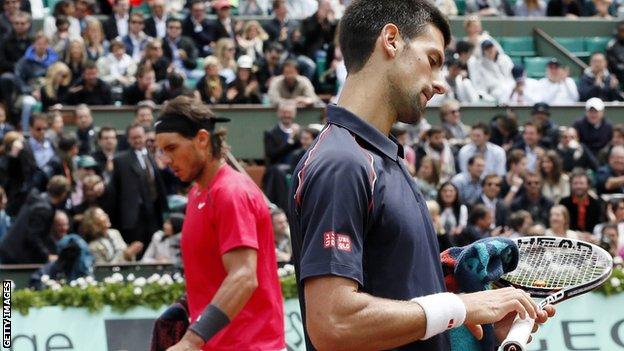 Rafael Nadal and Novak Djokovic will meet on Sunday in a French Open final loaded with significance for both men.

The pair will play each other at Roland Garros for the third consecutive year, with the world number one ranking on the line.

Nadal is attempting to win his ninth French Open, and become the first man to win five in a row.

"I think Nadal is the favourite. There's no doubt in my mind when you've won it eight times and you're still out there playing as well as he is for the most part. I think that Nadal is just chomping at the bit in a way, just waiting to get to this match.

"He won't talk about it, but he's hearing that he's not the favourite. How could this guy not be the favourite? If you've won it eight times I would think you're feeling pretty good about yourself."

Djokovic hopes to join a list of just seven men to have won all four Grand Slam titles in their career.

The top two seeds had been widely expected to meet in the final and it has been a subject of much debate as to which of them should be considered the favourite.

On the face of it, world number one Nadal has a formidable case with eight titles behind him and an incredible 65-1 record in Paris over the last 10 years, including five victories over Djokovic.

However, the Serb has been inching closer at Roland Garros, losing the 2012 final in four sets and last year's semi-final 9-7 in the fifth.

Djokovic, 27, has also taken control of their personal duel over the last nine months, winning all four of their matches including the Rome Masters final on clay last month.

"I'm going to try to be aggressive, because that is the only way I can win against him," said the Serb.

"I know that, of course, this is the court he's most dominant on. He has only lost one time in his career. This is where he plays his best.

"But we played some really close and good quality matches the last two years here, and knowing that I was that close to win against him gives me that reason to believe that I can make it this time."

The odds might have swung back in Nadal's favour following Friday's semi-finals, in which the Spaniard hit his very best form in brushing aside Andy Murray, while Djokovic laboured in hot conditions against Ernests Gulbis.

Another warm day is forecast on Sunday, something that helps the Spaniard's game.

"My ball creates more topspin," he said. "The ball goes quicker in the air, and with my forehand I am able to create more with less."

Nadal, 28, has won 13 Grand Slam titles to Djokovic's six and has already completed the 'career slam' of all four major titles.

"I'm going to go on court with the same motivation than him. I don't know if the same pressure than him. Probably we are in different situations."