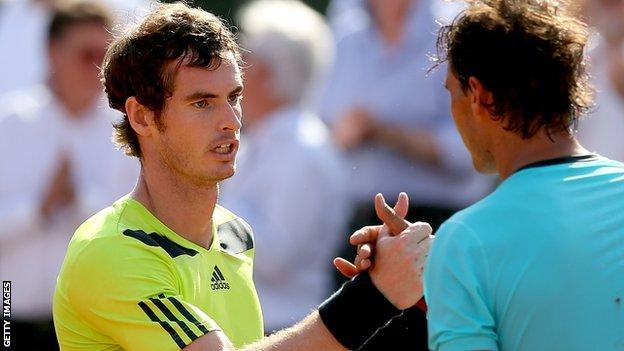 Andy Murray is looking forward to feeling the "positive energy" when he returns to Wimbledon to defend the title he won last year.

Murray lost to Rafael Nadal in the French Open semi-finals on Friday.

He will play at Queen's Club next week, before Wimbledon begins on Monday 23 June.

"I expect to play well there," he said. "I'm really looking forward to going back. I think it will give me a lot of positive energy."

Murray was well beaten 6-3 6-2 6-1 by eight-time champion Nadal in Paris, with the Spaniard extending his incredible record at Roland Garros to 65 wins and one defeat.

"I'll think quite a lot about it over the next couple of days and try to gain some motivation from it," said world number eight Murray.

"It was obviously very disappointing and the next few days probably won't be a whole lot of fun for me, but once I start hitting on the grass I'll probably forget about it a little bit.

"Hopefully I can learn something from the match first. It's been a tough surface for me over the years and semi-finals is a good result, but the match [on Friday] wasn't good enough."

It was the first time since he underwent back surgery in September that Murray had reached the last four at a Grand Slam.

"I'm glad I'm back playing to a level that was able to get me through to the last stage of Slams," he said. "I just need that extra few percent so that I can give myself a chance to try and win them again.

"But the grass will obviously help me. It's a surface I have always enjoyed playing on. I think it's been my most successful surface over my career.

"I'm really looking forward to Wimbledon especially. It's only two-and-a-half weeks away, so I don't have too long to wait."

Whether Murray will have a new coach in place by then remains unclear, with the Scot saying he rated the chances at "50/50".

"I haven't spoken to anyone since the [French Open] began," he added. "We'll see over the next few days what happens."