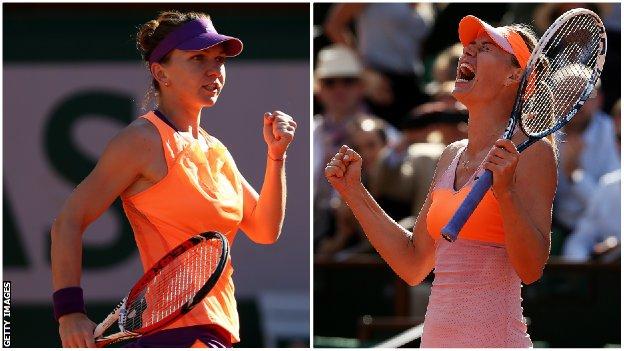 Simona Halep aims to cap an astonishing year by beating Maria Sharapova to win her first Grand Slam title at the French Open on Saturday.

The Romanian was ranked 57th when she lost in the first round at Roland Garros in 2013.

Whatever the result of Saturday's final, which begins at 14:00 BST, she will move to number three in the world.

"I had an impressive 12 months, but at this tournament it's more - it's fantastic," said the 22-year-old.

"It's incredible and I want just for the final to play a good match."

Halep had never won a Women's Tennis Association title this time last year but, since her early exit in Paris, she has racked up seven tournament wins and she reached the final of this year's tournament in France without dropping a set.

Sharapova remains an obstacle she has yet to overcome, however, with the Russian having won all three of their previous matches.

Halep draws hope from the fact that she has improved each time, pushing the former world number one to three sets in Madrid recently.

"I don't know how I have to play to beat Maria," Halep said. "But I have to take that revenge.

"I will fight for this one. I played a really good match in Madrid in the first set. I started really well. I was very fast on court and I opened the angles very well.

"But she came back very, very well and she hit strong, stronger than me at that moment."

Sharapova, 27, has made a habit of coming back strongly in Paris over the last week, recovering from a set down in her last three matches.

The seventh seed is through to her third successive French Open final, having won the title in 2012 and is desperate to add to her four major titles.

"You put so much effort, you and your team, to get to this position," she said.

"If some things are not working out, I don't just want to quit in the middle, because when you lose the first set or a few games or you're down a break, that's not the end of the match.

"That's the type of philosophy that I play with."

And while her opponent might be in the form of her life, Sharapova will go into Saturday's match with the experience of eight previous Grand Slam finals behind her.

"I think she's playing really well," said the Russian. "She hasn't dropped a set this tournament. Despite all that, I'm in a Grand Slam final.

"No matter who is across the net, I feel it's a great opportunity for the both of us. I'll be there until the very last point."