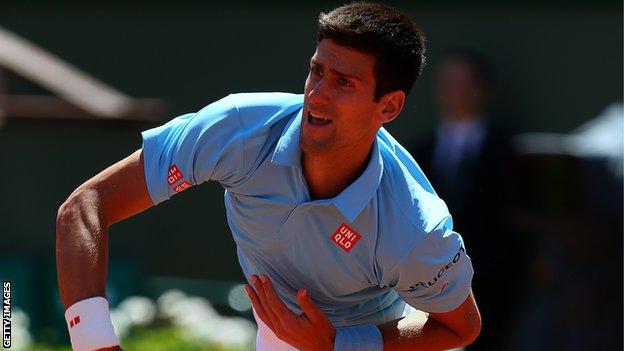 Novak Djokovic battled past Ernests Gulbis on a hot afternoon in Paris to reach his second French Open final.

He is trying to become the eighth man in history to win the career Grand Slam.

"The first two sets went well," said Djokovic. "Then suddenly midway through the third set I started to feel physically fatigued a little bit, and you could feel that.

"You could see that both me and him, we struggled on the court. It happens, you know. The important thing for me is that I realised what's going on. It's nothing serious.

"I'm going to have now two days of recovery and get ready for the final."

Djokovic remains on track to win a first French Open title but will hope for a cooler afternoon on Sunday.

After easing through the first two sets against Gulbis and doing an excellent job of subduing the Latvian's power, the heat began to take its toll in the third set.

He fought off break points in the second and sixth games before succumbing in the eighth when Gulbis fired a backhand winner down the line.

The crowd was finally roused by the contest on a sultry afternoon, but Gulbis appeared to be having his own difficulties with a back issue, and the fourth set was a fractured, sluggish affair.

Djokovic moved 2-0 up when Gulbis buried a forehand in the net, only to hand the advantage straight back - smashing his racquet in anger and accepting the point penalty by raising his hands to the jeering spectators.

A fifth set seemed possible until the Gulbis challenge evaporated in a matter of a few points in game eight.

From 30-0, a double fault and two errors gave Djokovic the chance to serve for the match and the Serb had to do little more than get the ball in play, with Gulbis firing a tired forehand into the net on match point.

Gulbis said that "tiredness and tension" were all he was struggling with, adding: "The difference in the match was, first of all, I'm not used to playing these kind of big matches.

"It's just normal I felt extra nervous and extra tense.

"I can take one positive side out of the match: that I could still win a third set feeling that nervous and that extra tired, and I saw that he was feeling the same. So, it's not only me."