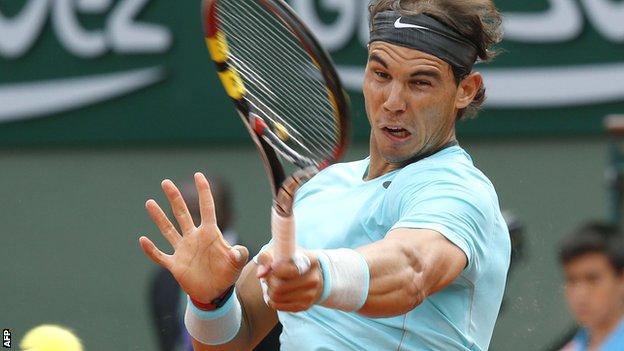 Rafael Nadal continued his quest for a record fifth consecutive French Open title, reaching the quarter-finals with a 6-1 6-2 6-1 win over Dusan Lajovic.

The 27-year-old took only 93 minutes to oust the Serb, losing just 33 points.

"I'm relieved but also happy," said Petkovic. "It was super tough, because I didn't know her at all. I just stalked her on YouTube yesterday the whole day, and I was already impressed."

"I'm happy with the way I played," said Nadal. "I was able to control the points from the baseline, which is important for me."

"I'm really happy to reach the quarter-finals in Paris for the first time in my life," said Halep, who plays Svetlana Kuznetsova in the last eight. "I feel confident and I like the clay but I want to go further even if I know it's going to be very tough in the next round."

"In the third set, when I broke him he started to go for his shots and played more freely," said Monfils. "I became too defensive so I had to accelerate again. I'm tired. You know, it's not easy, second week. It's never easy. Even in three sets. I think I lost a lot of energy today, nervously."

"I will try to do my best," said Ferrer of facing Nadal. "I will try to play aggressively with my forehand and try to finish the points on the net. But of course it's going to be difficult with Rafael on a clay court."

"It was not easy to stay focused on the match but I am really happy," Errani said. "There were a lot of Italians supporting me and also a lot of French and I thank them for helping me to win."

"We played some great points, he fought extremely hard in the third set," Murray said. "I was a bit nervous at the end but I'm glad I managed to get through. I was trying to play more aggressive because I knew I'd be a little bit tired in my legs. Thankfully the balls were going in; that doesn't always happen."

Selected other results - Court One

"I think she's a very good player," Kuznetsova said of next opponent Halep. "She's already in top 10. I think she going to be good, even better than she is now."

"Pascal is very peculiar. Several times I had bad experiences was Pascal Maria. He's not the kind of umpire I get along with, I can tell you that." Fernando Verdasco takes another umpire off the Christmas card list.

"Once when I played in England, I stayed at a hostel and next to me were 25 boys celebrating something. I don't know what. They kept singing English songs for the whole night and I had to play next day at 10am. Well, I lost." It sounds like Andrea Petkovic might have met a rugby team.

"It's OK. It's one decision about the king. It's not my decision. It's OK, no? I'm OK. I don't have any problem about the kingdom." David Ferrer gives his thoughts on the King of Spain's abdication.

Guillermo Garcia-Lopez is not the first person to struggle to work out Monfils. "With Gael, you cannot expect normal things. Sometimes he's playing unbelievable; sometimes, you don't know why, he's not doing anything. It's a difficult mind."

"Why would she be? She's five in the world. Why would she be underrated?" Some people might underestimate Simona Halep but Sloane Stephens is not one of them.

"He was somebody I really liked. He was very close to me. Over the last few years our relationship's developed, and I always wanted to thank him for the kindness he showed." Rafael Nadal on the abdication by King Juan Carlos of Spain.

Seventeen-year-old Katie Boulter advanced to the second round of the girls' singles with a 6-1 3-6 6-3 win against American Raveena Kingsley. 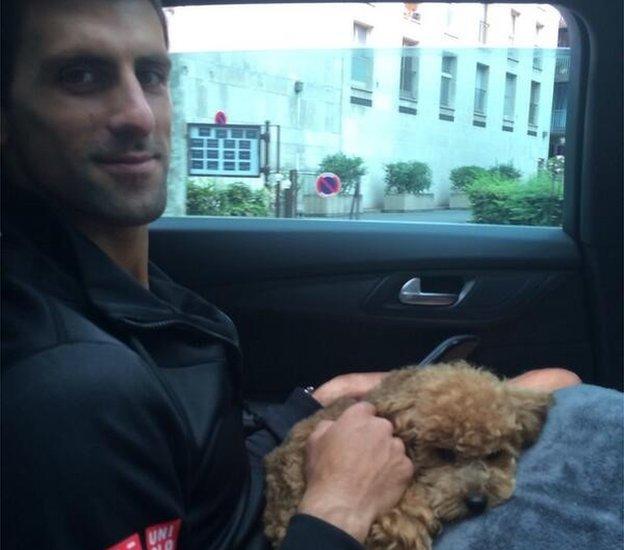 "Look who's going to training with me," tweets second seed Novak Djokovic.