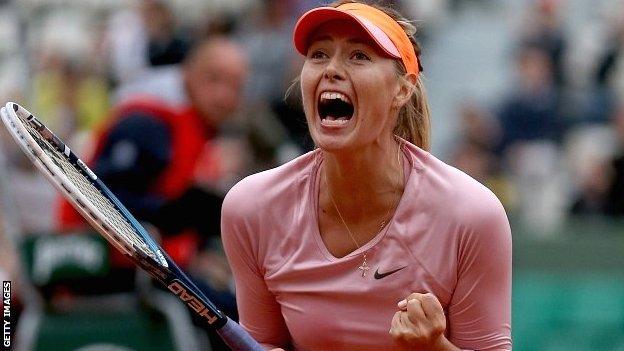 In the men's draw, Novak Djokovic brushed aside Jo-Wilfred Tsonga 6-1 6-4 6-1 to reach the quarter-finals.

The second seed will next play Milos Raonic, who beat Marcel Granollers.

Tomas Berdych is also into the last eight after a comfortable 6-4 6-4 6-4 win over John Isner. He meets Ernests Gulbis, who beat Roger Federer.

Two men's third-round matches were carried over from Saturday, with Fernando Verdasco seeing off Richard Gasquet 6-4 6-4 6-4 to set up a last-16 tie against Britain's Andy Murray, who beat Philip Kohlschreiber.

"I'm confident, and I really believe in my skills. I believe I can play with the best girls out there," said Bouchard.

"She's top 10, so I respect her. She can play some really good tennis. I was really mentally prepared for anything, for a battle."

"My objective right now is to rest and prepare the best I can to play this match against Murray," said Verdasco. "I have nothing to lose. He is favourite because of his ranking."

"With the support Jo-Wilfried Tsonga has on home soil, I needed to start with a high intensity, good movements and try to get as close to baseline as possible," said Djokovic.

"I prepared well with my team and executed very well. The scoreline was perfect for me and I'm very happy with that performance."

"I think it's a good thing to avoid playing the tie-breaks with him," said Berdych. "That was one of my plans in the beginning, and I'm really glad that it was working pretty good."

"I don't have a ready explanation," said Suarez Navarro about the big names to fall in Paris. "I simply believe that the women's circuit is more and more consistent. We've got to be careful. Everybody plays well nowadays."

"There was a few moments where I'd be up quite handily on my serve, and I'd sort of drift away for a little bit," said Raonic. "But when I came down to the wire I was playing those moments well."

"She uses her quick serve extremely well to start and set up the point," said Sharapova. "The slice, especially in the conditions that we played in tonight, it was very effective. It stays very low. But with that said, I still was able to win nine games in a row. So, you know, I'm quite pleased about that."

Stosur said: "I was a set all, 40 all, and missed a return in the top of the tape. I mean, I was right there to win it. I actually can't believe from that moment I didn't win another game. How quickly things can turn."

"I'm not big on medical timeouts. I don't like to take it, but I take it when it's really necessary. It probably was my third medical timeout in life." Ernests Gulbis on taking a timeout for his back and his hamstring.

Roger Federer is not overflowing with sympathy. "If the rules allow you to do that, what can you do? There is nothing much. He didn't look hurt in any way. But if you can use it, you might as well do it."

"We all have choices. I can have a choice to break a racquet and get a penalty. The kid can have the choice to take it or not. I think he did a great choice." Gulbis again, on breaking his racquet and giving it to a boy in the crowd.

"I didn't go through happy moments today. It was not fun for me." Jo-Wilfried Tsonga could do with a pick-me-up after an afternoon with Novak Djokovic.

"Best friend on tour? I don't have one. I don't think the tennis tour is the place to have friends. For me it's all competition." No messing about from Eugenie Bouchard.

Maria Sharapova has been thinking along similar lines for years: "I know that what has got me my success is the fact that I'm a big competitor and that I don't want to give anyone a chance. I was never here from day one to make friendships. This is a battlefield for me, and I want to win."

Andy Murray had a restless night thinking about his fifth-set shootout: "I didn't sleep much and I woke up quite a few times. I was ready to play at 4, 5 in the morning."

Things were not much better over at Philipp Kohlschreiber's: "My sleep wasn't good, either. I was sweating a lot. If you finish late, you try to recover. You drink a lot, so quite often to the toilet, and, well, it wasn't a great night."

The 17-year-old from Scotland took a closely-fought first set before easing through the second for a 7-5 6-2 win. 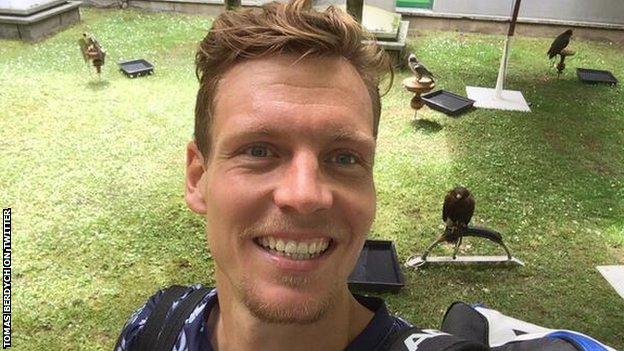 "Winning selfie with the family," tweets Tomas Berdych, known to some as 'T-Berd'.