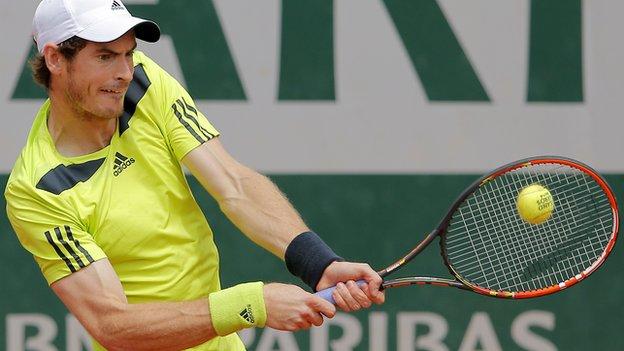 Andy Murray held his nerve to win 12-10 in a fifth set shoot-out against Germany's Philipp Kohlschreiber at the French Open.

The third-round match resumed at 7-7 in the final set after bad light had halted play on Saturday.

"Andy Murray seized his moment. He hit the backhand across court for the winner. A drama that need not have been written as Murray let a golden opportunity slip last night.

"But you have to hand it to him as he has got the job done. There is no smile on his face, just relief."

He next meets Fernando Verdasco for a place in the quarter-finals.

Spanish 24th seed Verdasco had earlier completed a 6-3 6-2 6-3 win over Richard Gasquet in another match that had been suspended on Saturday evening, with Murray and Kohlschreiber brought to a halt by the umpire at 21:40 local time.

They had to wait until Sunday's opening match on Lenglen between Tomas Berdych and John Isner had finished before returning to action at 13:25.

Murray, seeded seventh, could take confidence from seven wins in his last eight five-set matches, and had experienced a similar situation on the same court three years ago when he beat Serbia's Viktor Troicki in a fifth set.

However, the Scot had never been extended past 7-5 in a decider, and required several bouts of treatment on his leg the previous evening.

With the tension evident from the first ball struck, Murray held twice and earned the first match point of the contest at 9-8, only for Kohlschreiber to thump away a smash.

The German, seeded 28th, had a chance in the following game but Murray saved break point with a heavy first serve, and at 9-9 the Scot enjoyed some fortune with a net cord at 15-30.

The momentum swung back in Murray's favour and he attacked the Kohlschreiber serve once again to move to 15-40, and two more match points.

He stepped in on a Kohlschreiber second serve and smacked away a backhand return to finally end the contest after four hours and seven minutes over the two days.

"I think considering the circumstances it was pretty high standard," said Murray.

"It's obviously very tough. I didn't sleep much and I woke up quite a few times. I was ready to play at four, five in the morning.

Asked about the physical issue he struggled with, Murray added: "I was cramping. That was what it was. It wasn't something I went into the match with. It was the first five-set match I played since my surgery."

Kohlschreber said: "I just tried to hang in. I had a very good feeling that the momentum was maybe a little bit more my side yesterday night.

"But overall I saw many matches from him. He's a huge fighter. He never gives up. I knew exactly what's coming."