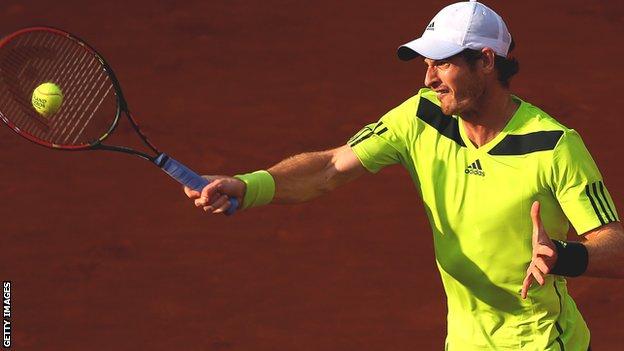 Andy Murray's French Open hopes remain alive after his third-round match against Philipp Kohlschreiber was suspended at 7-7 in the deciding set.

Murray had led by a break twice in the fourth set and early in the fifth, all the while struggling with a leg injury.

"This was a drama that should never have been written, as Murray was coasting into the fourth round. But his serve - which had been erratic - became increasingly fitful, and Kohlschreiber took the opportunity of a deciding set with relish.

"It means Murray's first five-set match since Wimbledon will be determined by tennis's equivalent of a penalty shoot-out. Murray must remember that he's broken first in each of the sets they've played."

The contest was halted in fading light on Court Suzanne Lenglen at 21:40 local time, and will be completed on Sunday.

The pair will resume after the match between Tomas Berdych and John Isner, which begins at 10:00 BST.

Murray might benefit from the delay after looking distinctly uncomfortable at times against the German 28th seed, grabbing at his left leg and requiring treatment from the trainer in the final set.

He had earlier recovered from losing five straight games in the first set by breaking twice to win the second and take control of the contest.

A run of seven games out of eight gave him the third and put him within sight of the finish line at 3-0 in the fourth set, but the drama was only just beginning.

Kohlschreiber, on a six-match unbeaten run, attacked the Murray second serve and twice pegged back the Scot before forcing a decider.

Again Murray moved ahead; again he could not capitalise. And with the trainer attending to him at the changeovers, his prospects looked bleak.

The Wimbledon champion dug deep, however, determined to avoid his earliest exit at a Grand Slam since 2010.

Increasingly fired up by the battle, his first five-set match since Wimbledon, he twice got to within two points of victory on the Kohlschreiber serve.

At deuce in what proved to be the final game, Murray worked himself a tantalising opening only to blaze a mid-court backhand wide, and Kohlschreiber held on.

With the set now tied at 7-7 and the sun finally dipping behind the Lenglen stands, the umpire brought an end to the drama - at least until Sunday.

The winner will go on to face Frenchman Richard Gasquet or Spain's Fernando Verdasco in round four.

That match only got under way on Court Philippe Chatrier at 20:00 local time and will also resume on Sunday, with Verdasco leading 6-3 6-2 2-2.