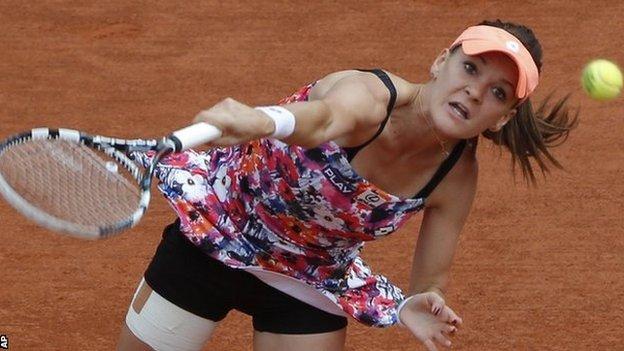 The 25-year-old Pole was beaten 6-4 6-4 as Thursday's opening match on Court Philippe Chatrier produced another surprise.

"The tournament is wide open now. I was at Ajla's press conference. She said there was a feeling anybody can beat anybody and said that she respects the big name players but doesn't fear them. As for Radwanska, she never really looked comfortable. Her game doesn't match up to the surface. With Serena and Li Na out, this would have been a golden opportunity for her first Grand Slam, but it all got too much for her."

Seventh seed Maria Sharapova, the 2012 champion, is through to the last 16 after beating Argentina's Paula Ormaechea 6-0 6-0 in 51 minutes.

Former winners Ana Ivanovic and Svetlana Kuznetsova, and 2010 finalist Sam Stosur, are among the other remaining players with a significant history at Roland Garros.

Stosur showed that she is a serious candidate for the title with a 6-4 6-4 win over Australian Open finalist and ninth seed Dominika Cibulkova.

Radwanska had never been beyond the quarter-finals in Paris but she was still expected to be too strong for Tomljanovic.

The 21-year-old, ranked 72nd in the world, had only ever beaten one top-30 player before Thursday and had never been past the second round of a Grand Slam.

But Tomljanovic started much the better, racing to a 5-1 lead, and Radwanska was never able to peg her back.

The Pole was broken at the start of the second set and saw a break point slip by in game eight when Tomljanovic nervelessly angled away a volley, and the Croat served out the biggest win of her life two games later.

"After seeing the two first seeds go out, you kind of feel like 'I can do this too,'" said Tomljanovic. "I grew up with these girls that are beating them.

"I went on the stadium for the first time, and Radwanska kind of feels like home there, because she's been there a lot more than I did. I went out there, and I really, inside really thought I could win.

"I think that showed and it is why I won."

The 2012 Wimbledon finalist rued not making the most of her opportunities.

"She definitely played good tennis today," said Radwanska. "I had my chances, I didn't take them. I think that cost me the match.

"It's stupid to say that. It doesn't matter who is in the draw, if you play good then you're going to win. I just didn't play good enough today to win the match."