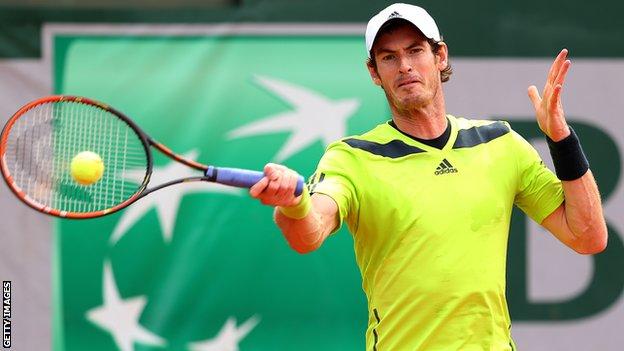 Andy Murray made smooth progress into round three of the French Open with a straight-sets win over Australian Marinko Matosevic.

Murray goes on to face 28th seed Philipp Kohlschreiber in the last 32 after the German beat Denis Istomin.

"That was so impressive in every department - and what a way to finish the match. Andy Murray's backhand has been the standout shot of the match. He served well, moved well and is now quite a threat in this draw."

Matosevic, 28, was outclassed by the Wimbledon champion in the intimate surroundings of a court often referred to as 'The Bullring'.

"I returned very well in the second serve," said Murray. "I attacked it very well. My timing was there on both sides, forehand and backhand side on that shot.

"That was for me was the best part of my game today."

It was the second time the pair had met and Matosevic, making his debut in the second round of a Grand Slam at the 13th attempt, again failed to register a set.

Murray, 27, broke in the very first game when the Australian sent a backhand over the baseline, and the Scot saw off a fleeting moment of danger with an ace on break point in game four.

Matosevic had a chance to get a foothold in the match at 0-40 in game eight, with Murray grinning ruefully as his serve lost its bearings momentarily, but the world number 66 could not convert.

Murray fought his way back to hold serve, and with it he effectively broke Matosevic's resistance, the Briton then rolling through eight of the next nine games for a two-set lead.

"There were a couple games right at the beginning of the sets where I had opportunities to break," added Murray. "One very long deuce game. I had 0-40, and maybe it took me six or seven break points to get it.

"But I was just trying to make sure that my intensity was there every moment, especially at the beginning of the sets. I managed to get ahead early in all of them, and that helped."

Matosevic repeatedly berated himself, and his team on the sidelines, as Murray's returns continued to fly back past him.

When he dropped serve once again in a 13-minute game at the start of the third set, the contest was as good as over, and Murray's failure to serve out at the first opportunity proved more of an irritation than a serious threat.

The 2011 semi-finalist quickly moved to 0-40 in the following game and appropriately finished off the match with another of those backhand return winners that had made Matosevic's afternoon so difficult.

"It was a good serving performance today, especially when I was down in games," continued Murray. "In the game I got broken right at the end it was not down to my serving, really. I just missed a few other shots."

With the victory, Murray took his career record against Australians to 8-0, and on six of the previous occasions he has gone on to win the tournament.