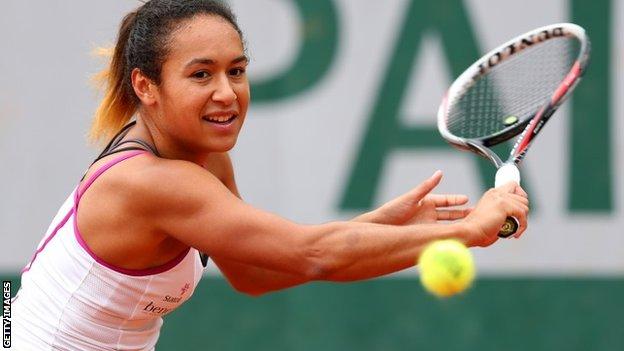 Britain's Heather Watson made it through to round two of the French Open with a straight-sets win over Barbora Zahlavova Strycova.

Watson, who came through qualifying, took her winning run at Roland Garros to four matches with a 6-3 6-4 victory.

The British number two has now won 11 matches in May alone following victory at the Prague Open.

The 22-year-old from Guernsey will next face Romanian fourth seed Simona Halep.

"Heather Watson showed bags of composure and quality as she reminded us of the form which once took her into the top 40 in the world. She is expected to climb back into the top 80, and regain the British number one ranking, as a result of her run here - but more importantly, now looks a more threatening competitor with a much more attacking outlook."

"I didn't feel I played as well as I have been today, but she's a very different sort of player," said Watson.

"She is very tricky. She hits drop shots and comes to the net on random balls, not usually the 'right balls', to throw you off.

"So it's different playing a different opponent. I just had to deal with what I was given today."

Watson went into Tuesday's match on a cool and blustery Court Six as the outsider in terms of rankings, at 92 to Czech Zahlavova Strycova's 63.

But the Briton made it as high as 39 early last year before illness and injury struck, and she appears to be back in that sort of form.

Watson had talked earlier in the week about her new attacking game plan and her forehand in particular kept Zahlavova Strycova on the move as she went 3-0 in front.

There was even time for an embarrassed smile from Watson after she completely missed a smash but, thinking quickly, flipped the ball over her head and watched as her opponent blazed a backhand wide.

Watson appeared to have been pegged back when she dropped serve in game five - having earlier thought she had won the game, only to touch the net as she slid on the clay.

A double-fault from Zahlavova Strycova handed back the initiative in the next game, however, and Watson eased through four consecutive games to move a break up in the second set.

Again there was a brief lull in the Briton's game and Zahlavova Strycova came back to lead 3-2.

But a time violation appeared to upset the Czech in game seven and she promptly netted a backhand on her way to falling behind once again.

Watson gave the large British contingent in the stands a few nervous moments before converting her third match point, maintaining a run that is likely to see her regain the British number one spot from the injured Laura Robson in the weeks to come.

"I'm not really thinking about that at the moment, to be honest," said Watson.

"I'm just enjoying my tennis, doing everything I can right the right way, and all that will come with itself if I keep doing the right things."

She added: "I was very confident today, even though I fresh-aired a smash at the beginning. That was really funny. I kept playing and it served me well."