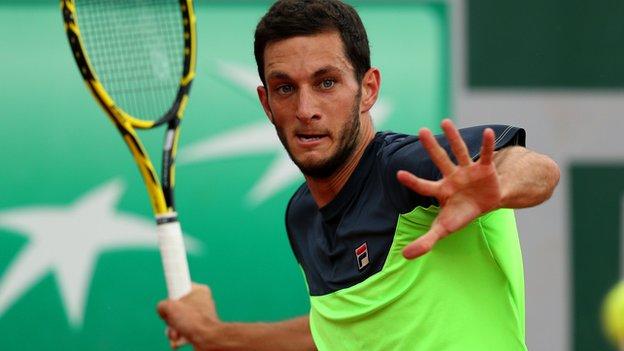 Britain's James Ward could not capitalise on a fine start as he lost in four sets to Spanish 17th seed Tommy Robredo at the French Open.

Ward had progressed through three qualifying rounds to reach the main draw in Paris for the first time.

The Londoner edged a high-quality first set but, after a 50-minute rain delay, Robredo dominated on the resumption.

"Even if life doesn't quite start at 30 on the ATP tour, it seems to gather momentum in a player's late twenties, and here was more evidence that Ward's best days could still be in front of him.

"The British number three could reach a new career high ranking if he plays well on the grass, where his big serve and ground strokes will gain more reward than they did on this slow and damp court in Paris."

Ward, 27, will head back to the UK for the grass-court season having earned more than £19,000 in prize money and enough points to boost his ranking from 168 in the world.

He was always a long shot to extend his stay in Paris after being drawn against Robredo - five times a French Open quarter-finalist - but the Spaniard appeared rattled early on and Ward missed opportunities to further test his nerve.

"I started really well, had chances in the second set as well, and fought my way back into the match after the third set," Ward told BBC Sport.

"I gave myself a chance and I'm pleased with my efforts.

"He likes it to be slow so he can use his heavy forehand and make me move, try and get me off the court.

"He did it well. If he hadn't it would have been a different result, but he played really well at times and came up with some great shots."

With the drop shot that served him so well in recent Davis Cup ties again doing plenty of damage, Ward recovered an early break and clinched the opening set in a pulsating 10th game.

However, the steady drizzle of earlier had become heavy rain and players and officials were forced from the court and Ward could not regain his grip on the contest on the resumption.

Robredo broke at the beginning of the third and fourth sets and although Ward was still able to apply pressure, it was increasingly fleeting.

The British number three broke back for 4-4 in the second set but immediately dropped serve himself, allowing Robredo to serve it out, and Ward then failed to convert from 0-40 early in the third.

A seventh break of the match gave Robredo a decisive lead in the fourth set and although a weary-looking Ward saved two match points on his own serve, the Spaniard closed out the victory with little fuss.

Reflecting on his efforts in Paris, Ward added: "It's a positive and I'm looking forward to taking the momentum into the next few weeks on grass, where I'll have a few good chances.

"I'll give it my all and I'm sure win a few more matches."