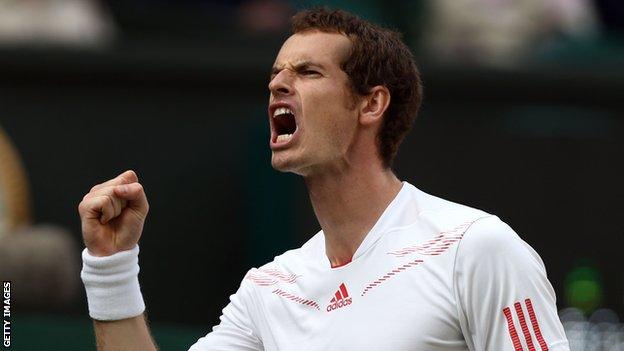 Neither Heather Watson nor James Ward are likely to emulate UKIP leader Nigel Farage in making the front page of Le Monde, but both have also made considerable gains in the past week.

Three wins in qualifying have earned each the right to stand alongside Andy Murray in the main draw of the French Open, on a surface which has often exposed Britain's finest players.

Watson and Ward will be hoping to make more headlines over the first week, as Murray sets his sights on filling his diary for a fortnight.

It is nearly four years since the Wimbledon champion failed to reach the quarter-finals of a Grand Slam, and the encouraging and enterprising way he played in Rome earlier this month offers the promise of a strong performance here at Roland Garros.

Even though Murray lost a tight deciding set in his Italian Open quarter-final with Rafael Nadal, it was wonderful to see him play with such freedom for large parts of the match. His backhand down the line was a formidable weapon and he attacked the baseline with the relish he displayed in last year's Wimbledon final.

A first Roland Garros title remains a long shot, but the cream usually rises to the top over five sets. And with the exception of last year's French Open - which the Scot missed with a back injury - he has been ever present in the Grand Slam quarter-finals since losing to Stan Wawrinka in the US Open third round of 2010.

"I feel ready to have a good run here," Murray told BBC Sport. "Rome was a big step in the right direction and it's up to me to maintain that consistency from now through until the end of the year, because that's what's been missing and lacking so far."

That lack of consistency does mean that predictions of another strong Grand Slam showing are made with a certain trepidation.

Murray has only reached the semi-finals at two of his last 17 Masters 1000 events, and we have witnessed huge fluctuations in his form this year. There have been encouraging signs - in Miami, Rome and the Davis Cup - since his return from back surgery, but he was at a loss to explain his performances in Indian Wells and Madrid.

There were a total of 99 unforced errors in his third-round match with Jiri Vesely in California in March, as Murray conceded a double break advantage to drop the first set. He managed to retrieve the situation on that occasion, but lost the deciding set - again from a break up - against Milos Raonic in the next round.

Then in Madrid, albeit just a few days after the terrible loss of Elena Baltacha, Murray had to be admirably honest about his shortcomings after a confidence sapping defeat by Santiago Giraldo. He told me he could not put his finger on the problem, and then really opened his heart to the written media, who may have considered billing him for the therapy.

But the upturn in Murray's form in Rome, allied to his belief that he has now found the coach to guide him through the next stage of his career, provide many reasons to be cheerful.

Despite James Ward's impressive showing in a GB shirt, both in Naples, and San Diego, his ranking has hardly changed since the start of the year. But his performances in beating top-100 player Blaz Rola and former top-50 player Ryan Harrison in qualifying have shown what a doughty competitor he can be on the clay.

His first-round draw could have been kinder, as Tommy Robredo remains a member of the world's top 20 and illustrated huge reserves of stamina and self-belief in winning three consecutive matches from two sets to love down en route to last year's quarter-finals.

Heather Watson has already won 10 matches in May in a wonderful riposte to the shoulder injury which threatened to stall the momentum she was gaining in her comeback from glandular fever. She should feel at least the equal of Barbora Zahlavova-Strycova in their first-round match, as the redesigned Watson spends less time waiting for mistakes from the other end of the court.

"Once I made myself play this aggressive tennis and was in control of the game and how it was going to be played, I realised how much fun it is to play that way," she said after dropping only two games in the final round of qualifying.