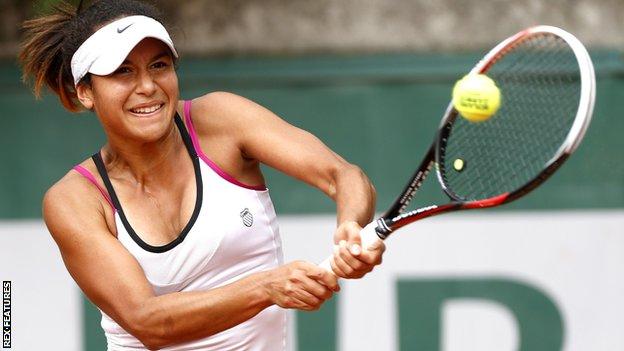 Heather Watson ensured there will be British representation in the French Open women's singles with victory over Estonian Anett Kontaveit in qualifying.

The 22-year-old from Guernsey won the third-round encounter 6-1 6-1 and will play Czech Barbara Zahlavova Strycova in round one at Roland Garros.

Round one matches start on Sunday.

I'm coming to it with lots of matches under my belt, and not just matches but wins

Kontaveit, 18, began the decisive qualifying contest, on a blustery Court 17, as an outsider as she is 96 places below Watson in the rankings at 188th in the world.

Watson has twice made the second round of the main draw in Paris and arrived this year on the back of winning a title in Prague last week.

Kontaveit showed a few flashes of potential early on, her heavy forehand recovering an early break in game three, but Watson's greater consistency and variety proved the difference.

The Briton pulled away to take the first set in 25 minutes and an early break in the second ended any serious resistance.

Watson wrapped up victory after 48 minutes to take her winning run to eight matches, and she will be hopeful of extending that record in the coming days.

"Winning is a habit they say," Watson told BBC Sport.

"I'm just taking advantage of how much I'm enjoying it, fighting, being healthy and just using that every day to play the best I can."

Watson lost in the first round of the main draw last year on her return to action after two months out with glandular fever, and her ranking dropped from a high of 39 to outside the top 100 in 2013.

"Last year was a very different story," she added.

"I was kind of lying to myself thinking I was ready after taking so long off, and then just having three weeks practice before playing a major event.

"This year is another story. I'm coming to it with lots of matches under my belt, and not just matches but wins. I'm feeling fit and healthy, have lots of energy and I'm ready to go."