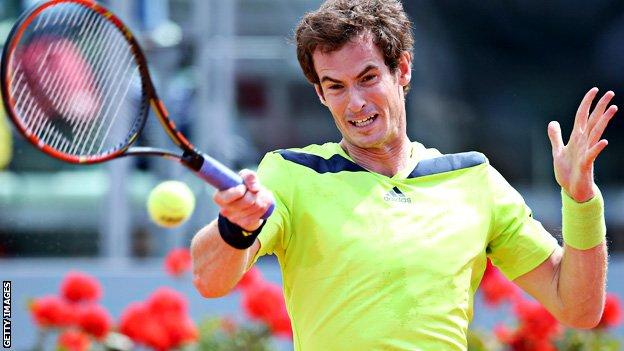 Andy Murray will play Kazakhstan's Andrey Golubev in the first round of the French Open, with champion Rafael Nadal in the same half of the draw.

Murray, seeded seventh, has faced Golubev once before, beating him 6-1 6-1 on the hard courts of St Petersburg in 2008.

Should the British number one, 27, progress to the second week, he could face Swiss third seed Stan Wawrinka in the quarter-finals and Spaniard Nadal in the last four.

In the women's draw, defending champion Serena Williams will play French wildcard Alize Lim in round one at Roland Garros, which starts on 25 May.

Golubev, 26, is ranked 55th in the world and beat Australian Open champion Wawrinka in the Davis Cup in April.

Germany's Philipp Kohlschreiber, the 28th seed, and France's Richard Gasquet, seeded 12th, are among the others standing between Murray and the quarter-finals.

A good run in Paris could significantly boost the Scot's ranking as he missed the tournament last year with a back injury.

Murray's clay-court preparation has included a second-round loss in Madrid followed by a run to the quarter-finals in Rome, where he impressed in a three-set defeat by Nadal.

"Davis Cup [in April] was fairly good for me but since then it was very patchy," said Murray. "Some good stuff mixed in with some bad tennis.

"Rome was a good step forward. I need to build on that, take confidence from it, and I need to try and keep that consistency for the next four or five months if I can."

Nadal said of 20-year-old Thiem: "I didn't have the chance to see him play a lot, but I heard very positive things about him.

"Everybody says he's a future top, top player. I will see. I play against Ginepri first. It's always a big emotion to have the chance to play here in Roland Garros. This place is the most important place in my career."

The weather forecast for the first week of the tournament suggests plenty of rain delays.

"I heard it's going to be quite difficult, especially the first week with the amount of matches there are to be played," said Federer. "It's clearly going to have an impact on the matches."

American Williams, a 17-time Grand Slam champion, could meet sister Venus in round three and former champion Maria Sharapova in the quarter-finals.