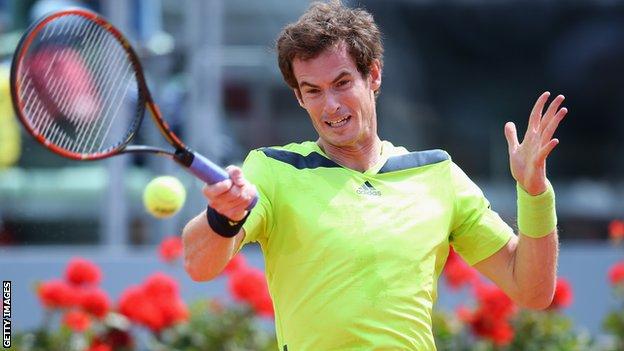 Great Britain's Andy Murray will face world number one Rafael Nadal for the first time since 2011 in the quarter-finals of the Italian Open.

Murray produced a determined display to beat Austria's Jurgen Melzer before Nadal came from a set down to see off former top 10 player Mikhail Youzhny.

"It's not a bad thing for me to play Nadal because I haven't played him for a long time," said Murray of Friday's match, which will start no earlier than 20:00 BST.

"With the French Open and Wimbledon coming I would be quite interested to play him to see how his game changed and all the things I can do to make it difficult for him."

It is the furthest Murray has gone in the Rome tournament since his semi-final defeat against Novak Djokovic in 2011 and bodes well for the start of the French Open on 26 May.

The tournament at Roland Garros is the only Grand Slam in which Murray has not reached the final, but he showed the battling qualities necessary for success on clay in beating world number 67 Melzer for the sixth time in as many matches.

"This week, I wanted to try and play solid tennis as much as possible and I did a pretty good job in tricky conditions," added Murray, who beat Marcel Granollers in round two.

"There are still some things I would like to do better. It is still a surface that takes me some time to get used to."

Murray, US Open champion in 2012, had never met Melzer on clay and took three of his five break opportunities.

Missed break points left Melzer visibly frustrated early in the second and he smashed a racquet at one stage.

After breaking to level, he gave away his serve in the set's seventh game, allowing Murray to twice hold serve for the match.

Second seed Djokovic beat Philipp Kohlschreiber of Germany 4-6 6-2 6-1 and will next play David Ferrer of Spain after the fifth seed won 6-2 6-3 against Latvia's Ernests Gulbis.

China's second seed Li Na went through to the women's quarter-final with a 5-7 6-2 6-2 success over Australia's Sam Stosur, while Serbia's Ana Ivanovic knocked out Maria Sharapova of Russia 6-1 6-4.