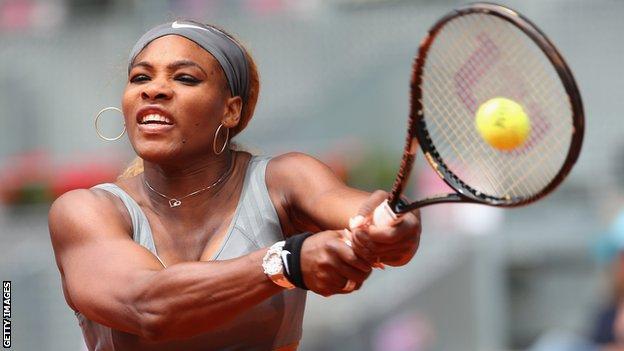 World number one Serena Williams is undecided whether she will defend her Italian Open title as she continues to recover from a thigh injury.

The American, 32, last week but has travelled to Rome, where she is due to begin her campaign on Wednesday.

Roger Federer and Novak Djokovic will play in Rome after missing Madrid.

"I'm taking it a day at a time," said 17-time Grand Slam champion Williams. "We'll see as the week goes on."

Williams has a bye in the first round and is scheduled to open against Germany's Andrea Petkovic in the second.

Federer, 32, skipped Madrid to be present at the birth of twin sons Leo and Lenny, while Djokovic, 26, pulled out with a wrist injury.

"I did not feel any pain four days before I was supposed to go to Madrid, though the medical team advised me not to go," said Djokovic.

"I listened to what they said, because I wanted it to heal 100%. Right now, I feel confident about the state of my wrist."

I don't want to mess up and just pick anyone

Britain's Andy Murray also has a first-round bye as the seventh seed and will play Marcel Granollers in round two on Wednesday, after the Spaniard beat compatriot Feliciano Lopez 7-5 6-1.

Murray continues to search for a replacement for former coach Ivan Lendl.

"It's very important that whoever it is knows I want it to be a long-term thing," said the Wimbledon champion. "I don't want to mess up and just pick anyone."

Rafael Nadal is the men's defending champion and top seed in Rome, and arrives off the back of victory at the Madrid Masters on Sunday.

Beaten finalist Kei Nishikori has withdrawn from Rome, instead returning to Florida for treatment on the back injury that saw him retire in the final set against Nadal.

Twelfth seed Grigor Dimitrov was among the first-round winners on Monday, along with 11th seed Ana Ivanovic and Venus Williams.