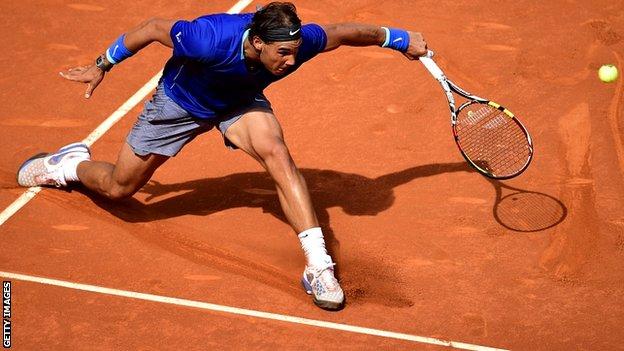 Rafael Nadal gave further evidence he is finding his best form with a straight-sets win over Roberto Bautista Agut in the Madrid Masters semi-finals.

The world number one beat his fellow Spaniard 6-4 6-3 to close in on a fourth Madrid, and 27th Masters, title.

Nishikori has won 14 matches in succession - including 10 in a row on clay - and he will rise to ninth in the rankings next week, making him the first Japanese player to break the ATP top 10.

Sharapova, 27, blasted her way past third seed Agnieszka Radwanska in 68 minutes, withstanding a second-set fightback by the Pole to win 6-1 6-4.

Reigning champion Serena Williams, who on Friday, is the only woman to have beaten Sharapova on clay since 2011.

"I really challenge myself to improve on clay courts because that was never my favourite surface in the beginning of my career," said Sharapova, the 2012 French Open champion.

"I feel really good physically. I put in a lot of matches in the last few weeks but that's what I want."

The 22-year-old was ranked 64 in the world this time last year but has rocketed to fifth on the back of six titles in 2013 and another one in 2014.

"I'm very excited that I can play in my biggest final tomorrow," said Halep. "I hope that I can control my emotions and just play."

Nadal, 27, was pushed hard by the fast-improving Bautista Agut, who will break into the world's top 30 on the back of his first run to a Masters semi-final.

He recovered from 4-0 down to 4-3 in the second set but ultimately could not contain Nadal, who looks to have put surprise quarter-final defeats in Monte Carlo and Barcelona behind him as he prepares to go for a ninth French Open title later this month.

"After a great match yesterday, to have the confirmation today that the improvement is real is a very good news and important for me," said Nadal.

"To be in a final here, in a difficult tournament at home after losing two weeks in a row in the quarter-finals, means a lot to me."

In the final, he will face a man in terrific form, with Barcelona champion Nishikori extending his unbeaten run on clay to 10 matches with a dramatic victory over fifth seed Ferrer.

The 24-year-old required treatment on his back during the second and third sets, and then saw nine match points slip by - eight in an epic final game - before finally sealing victory after two hours and 55 minutes.