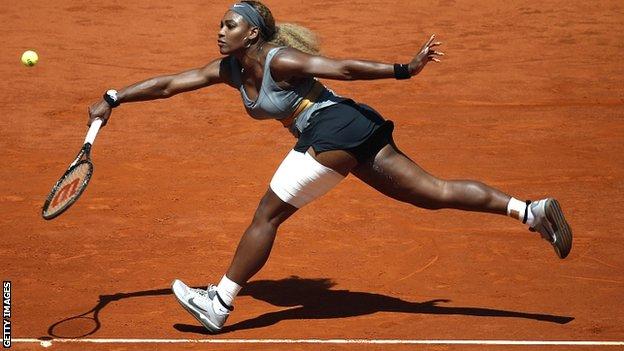 World number one and defending champion Serena Williams has withdrawn with a thigh injury ahead of her Madrid Open quarter-final against Petra Kvitova.

Williams, 32, had played with heavy strapping on her left thigh throughout the week in Madrid, but aims to return at next week's Italian Open.

The American will then defend her title at the French Open, which gets under way in Paris on 25 May.

"I suffered [the injury] during my first-round match," said Williams.

"I started to feel better but it is important that I have enough time to rest and recover. It's very frustrating. This isn't the way I wanted to end the week."

Williams had won the title in Madrid for the last two years, and in 2013 she went on be crowned champion in Rome and then claimed her second title at Roland Garros.

"I am planning to play in Rome," she added. "Fortunately, I have a [first-round] bye next week so will have an extra day of rest."

The Russian will play Poland's Agnieszka Radwanska on Saturday after the third seed battled past France's Caroline Garcia 6-4 4-6 6-4.

In the men's event, world number one Rafael Nadal beat sixth seed Tomas Berdych for the 17th time in a row to reach the semi-finals.

The Spaniard, 27, extended his eight-year unbeaten run against Berdych with a comprehensive 6-4 6-2 victory.

Berdych has won three of their 21 matches but the Czech's last victory came at the same tournament in 2006.

"I brought great energy and intensity to it and that's the best news, that it's my best (on clay) yet," said Nadal, who arrived in Madrid on the back of quarter-final defeats in Monte Carlo and Barcelona.

"The things that, historically, I've done well on this surface I managed to do them again today."