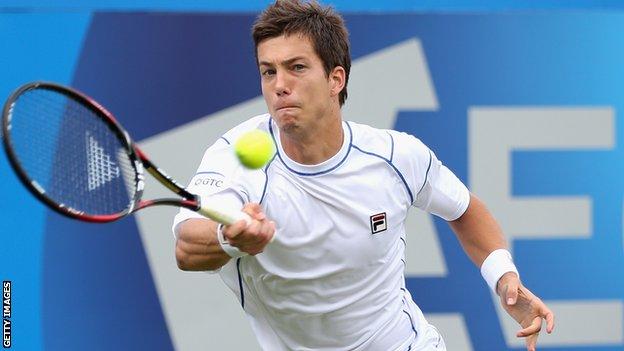 Slovenia's Aljaz Bedene is to declare his allegiance to Great Britain - and could play alongside Andy Murray in the Davis Cup next year.

He has lived permanently in Hertfordshire since 2011.

If his application for a British passport is successful, he will be eligible to represent Britain any time after February next year.

Did you know? Aljaz has a twin brother Andraz, who is also ranked on the ATP tour.

Aljaz's favourite shot is the forehand and his best playing surface is hard.

However, it is believed Murray will have the ultimate say on Bedene's participation.

If the Wimbledon champion is unhappy at the prospect of playing alongside a man who was born and brought up in another country, then Bedene will not be considered by captain Leon Smith.

Bedene's best surface is clay - the de facto surface for any team awarded a home tie against Britain - and he appears to have the potential to become a regular member of the world's top 50.

At the very least, Bedene's arrival would increase competition for the second singles spot, which has been shared in recent ties between James Ward and Dan Evans.

The Lawn Tennis Association has not yet been asked to support Bedene's passport application directly but has provided legal assistance and invited the player to train on a couple of occasions at the National Tennis Centre in Roehampton.

Bedene is now settled in Hertfordshire with his fiancee, Kimalie, who is a rising singing star in Slovenia, and is currently trying to prove he has spent enough time in the UK over the past five years to fulfil residency requirements for a European Union national seeking a British passport.

Johanna Konta, who was born in Australia to Hungarian parents, did not become a British citizen until May 2012: about seven years after making the UK her base.

Konta has been given a warm welcome, but Bedene will be aware that Greg Rusedski was not at all well received by some other British players when he switched his allegiance from Canada to Britain in 1995.

On Friday, Evans responded to the news of Bedene's intention to represent Britain by tweeting: "So a guy is becoming British who has already played for his country. Doesn't quite sound right to me!"

Bedene is based at the Global Tennis Connections Academy in Gosling and surprised everyone - not least his opponents - by helping his adopted team win the County Cup last November.

He had been planning to go public with his intentions at Wimbledon next month and is determined to represent Britain even if not initially selected to play Davis Cup.

He has been known to don Union Jack-style wrist bands in training and appears to have developed a strong affinity to the UK.

There are clearly commercial advantages associated with such a switch, although Bedene would now be too old to qualify for direct LTA funding as he turns 25 in July.

There is, however, the added attraction of wildcards - if required - into Wimbledon and the warm-up events at Nottingham and Queen's Club as well as Davis Cup fees which can be considerable.

Ironically, Bedene's most recent appearance ended in a straight-sets defeat to Britain's top teenager Kyle Edmund in the first round of a Challenger event in the Italian city of Vercelli last month.

Bedene was suffering from an inflamed left wrist at the time - an injury that he picked up while training in the UK at the end of last year - and has been advised not to return to competition until this month's French Open at the earliest.

Bedene, who was born in Ljubljana and currently stands at 108 in the rankings, reached his first ATP semi-final in Chennai last year and also gained direct entry into all four Grand Slam events for the first time.

The Lawn Tennis Association said it was aware Bedene wishes to switch his nationality, adding: "He is currently progressing with his citizenship application which will take some time, and in the meantime he will continue to base himself in Hertfordshire."