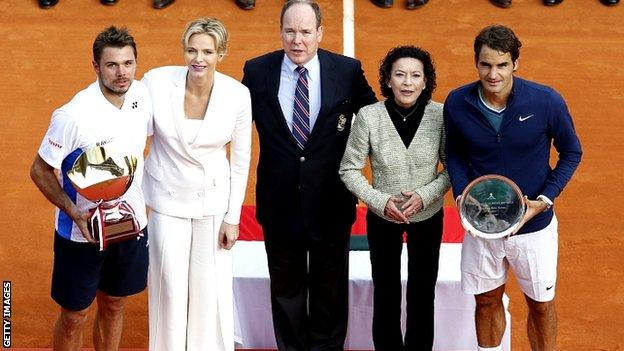 Federer, 32, had looked on course to secure one of only three Masters titles to have eluded him after the first set.

But Wawrinka, who won his first Grand Slam title at the Australian Open, took control from the second set tie-break.

Sunday's victory ensures he will stay at number three in the world rankings and ahead of Federer as the Swiss number one.

"I can see that when mentally I'm there and I'm fighting, I can beat all the players," said Wawrinka.

"I did an amazing job. I'm really happy after winning my first Grand Slam to win a Masters 1000 so quick. I didn't expect to."

Wawrinka and Federer are Davis Cup team-mates and their close friendship was evident when, unusually for imminent opponents, they practised together ahead of the final on Sunday morning.

For the first time since 2004, there was no Rafael Nadal in the Monte Carlo final, the world number one having lost to David Ferrer in the quarter-finals.

Federer had been beaten by Nadal on each of his three previous final appearances and went into Sunday's contest with a 13-1 record against Wawrinka.

Wawrinka is only the third winner in the last 37 Masters events outside the 'Big Four' of Rafael Nadal, Novak Djokovic, Roger Federer and Andy Murray, the others being Robin Soderling (2010) and David Ferrer (2012) in Paris.

Both players saved early break points but it was Federer who made the first move in game five and, serving impressively, it was enough to take him to the set.

It had been a relatively flat performance from Wawrinka compared to some of his spectacular recent displays, but he began to find his range early in the second.

A Federer double fault gave Wawrinka an opportunity at 30-30 in game two and the Australian Open champion converted with some aggressive hitting, but Federer hit straight back with a break to love.

The threat of a heavy rain shower briefly interrupted the action but they resumed in the drizzle and it came down to a tie-break, which Wawrinka dominated from the outset.

It was the third seed's more powerful hitting that held sway early in the decider and a heavy forehand into the corner earned him an immediate break.

From that moment on, Wawrinka powered away from his illustrious opponent, breaking for the third time in the match on his way to a 4-0 lead and sealing victory with a rasping forehand winner.

"It's always special to play Roger," added Wawrinka. "We know it's always a strange match, especially being in the final here. He's my best friend on the tour.

"We respect each other so much. I'm just trying on the court to win the match. Before and after, we are still very good friends."

Federer said: "I think it's one of the those finals that I could have won but Stan was tougher at the end. I think he deserved it just a little bit more.

"Of course, I'm very happy for Stan. It's a huge win for him after winning his first Grand Slam this year, also to win his first Masters 1000.

"To take the opportunities when they're there, that's key in a tennis player's career."