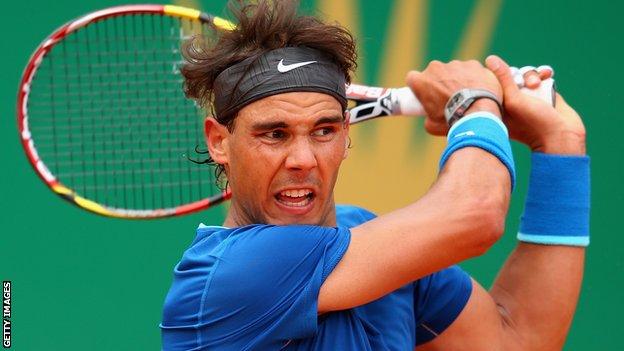 The world number one is only the 11th man to reach the landmark - with fellow Spaniard Carlos Moya, who retired in 2007, the last to do so.

Roger Federer joins them in the quarter-final following his 6-4 6-1 win over Lukas Rosol.

"I did what I had to," said top seed Nadal. "But playing David (Ferrer) is never easy. If you are not at the top of your game, you will lose. I'm just glad to be in a quarter-final."

Djokovic, who ended Nadal's eight-year Monte Carlo winning run in 2013, won the first nine games on his way to beating Carreno, ranked 60 places below him in the world.

"My object is to keep playing like this," said the Serb, who needed just 47 minutes to progress.

"It's impossible to predict the future, but I'm sure my quarter-final will take longer than this match."

Federer faces a last-eight meeting with Jo-Wilfried Tsonga after coming back from a break down to beat Rosol, winning 10 of the last 11 games.

Third seed Stanislas Wawrinka progressed without hitting a ball when Spaniard Nicolas Almagro retired before their third-round match with a foot injury.