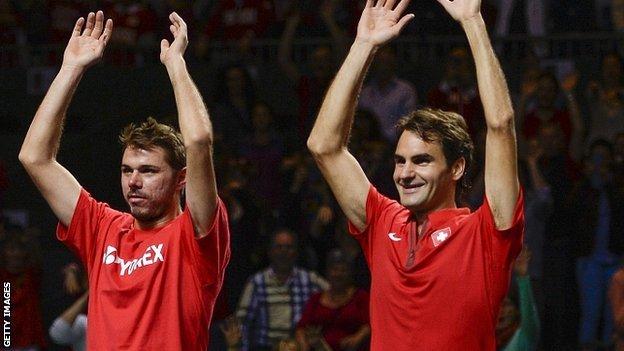 Roger Federer sealed Switzerland's place in the Davis Cup semi-finals as they avoided an upset by beating Kazakhstan 3-2 in Geneva.

The hosts had trailed 2-1 after doubles defeat for Federer and Stanislas Wawrinka, but Federer beat Andrey Golubev 7-6 (7-0) 6-2 6-3 after his team-mate overcame Mikhail Kukushkin.

The Swiss face Italy in the last four after the Italians beat Great Britain.

Elsewhere, France came back from 2-1 down to beat Germany 3-2.

Germany had been without their top four players for the tie in Nancy and took a shock 2-0 lead on day one.

"There was a fantastic reaction from them, starting with the doubles. Germany showed a lot of spirit and energy - it's a real team - but I just knew that my players would give more than 100% for the rest of the tie."

Defending champions the Czech Republic will be their next opposition after they completed a 5-0 whitewash of Japan in Tokyo.

Federer, 32, was delighted to win the decisive fifth rubber for Switzerland after Kazakshtan had threatened a major upset by taking a 2-1 lead on Saturday.

"It's great," said the 32-year-old, who is trying to guide Switzerland to a first Davis Cup title.

"I was hoping so much I was going to get a chance to play and not just watch Stan play. I got the opportunity and I'm happy I lived up to the hype and the expectations, and I was able to get the boys through so very happy for them.

"I was confident, not silly confident, but respectful confident towards the opponent (we could do it)."