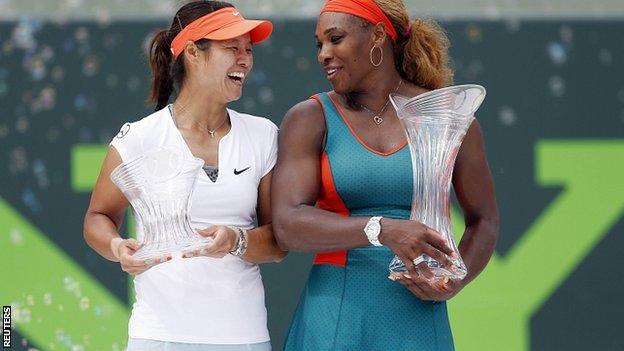 The 32-year-old world number one recovered from going two breaks down in the first set, and raced through the second for a 7-5 6-1 success.

In doing so, the American retained the crown she won last year and won her second title of the season.

China's Li, the world number two, has not beaten Williams in six years and has lost 11 out of 12 matches overall.

"It was a really important victory, especially against Li Na," said Williams. "She started so well and if it hadn't have been for the fans I don't think I could have pulled through.

"At 5-2 down in the first set, I felt I had nothing to lose. I started to relax and, when I relax, I play my best tennis."

Williams, who first played in the Miami event as a 16-year-old, was strangely subdued early in the match, being broken in the first game before dropping serve again for a 5-2 deficit after fighting off three break points.

But she won the next five games to take the lead, saving set point on the way and decisively breaking her fellow 32-year-old in a 12th game that went through six deuces.

With her serve improving and the power of her returning increasing, Williams galloped through the second set. A fierce backhand took her to 5-1 and victory was secured on the first match point.

Williams, who lives in nearby Key Biscayne, had previously shared the record for Miami titles with Andre Agassi.

But her seventh success was also a 59th career WTA triumph and extended her winning streak against top-10 ranked opponents to 15 matches.

"I was actually super excited at the end, because I remember sitting here last year trying to get to six," said Williams.

"Obviously I wanted seven but I don't want to put the pressure on myself to get to seven. I wanted to have the most titles here.

"I guess that I've grown up coming to this tournament as a kid, watching so many players, and to be one of those players now is really, really awesome for me."