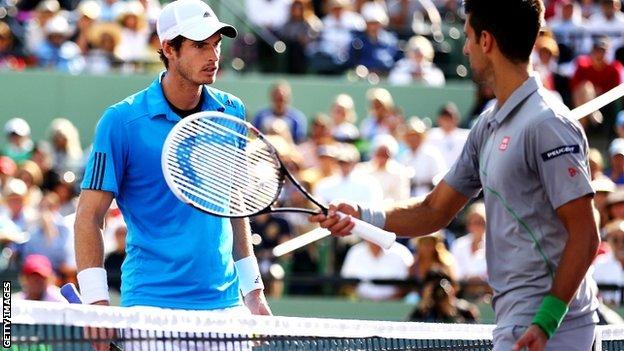 Maybe the rule is that you are not allowed to pass on his side with the racquet. I'm not sure

Federer was twice up a service break in the second set but failed to beat the Japanese, who will contest his second ATP Masters 1000 semi-final on Friday.

Murray must now focus on Britain's Davis Cup tie in Italy next month.

He also hopes to replace his who was watching from the stands in Miami, before the French Open begins at the end of May.

Despite the defeat, the Scot played arguably his best tennis since winning Wimbledon and undergoing back surgery in September.

Djokovic proved too strong, however, serving superbly on his way to a ninth consecutive win as he looks to back up his victory in Indian Wells earlier this month.

A gripping first set of fluctuating fortunes ended in controversy after 53 minutes, with a rattled Murray dropping serve to love following a disagreement with the umpire.

A replay on the stadium video screen showed Djokovic had clearly played a volley with his racquet over the net on the first point at 6-5.

That prompted Murray to approach the net and question his opponent, but the umpire insisted the Serb's racquet had not crossed the net when it made contact with the ball.

The next three points raced away from Murray, who headed to his chair and told the official: "You're having a laugh, you can see it on the replay. He [Djokovic] said his racquet was over the net!"

It appeared to sharpen Murray's focus early in the second set and, after a stunning backhand winner from well outside the tramlines made it 2-2, he finally broke serve in the following game with some fierce hitting.

The Wimbledon champion had finally wrestled the initiative, but he handed it straight back in a sloppy game that included two double-faults.

Djokovic had offered up just two break points and made around 80% of his first serves for much of the match and he would not give Murray another glimpse at a break as he rolled through four straight games to seal victory.

Asked about the incident in the 12th game, Murray said: "I'm not angry. It maybe had a slight bearing on that game, but I was still up a break in the second set."

Djokovic appeared not to be aware that the rules state a player cannot play the ball with their racquet on the opponent's side of the net.

"Look, it might be my mistake," said the six-time Grand Slam champion. "I think I crossed the net with the racquet. I didn't touch the net.

"Maybe the rule is that you are not allowed to pass on his side with the racquet. I'm not sure. You tell me.''

The defeat means Murray, 26, will slip to eighth in the world next week - his lowest ranking since 2008.

Second seed Li edged out Caroline Wozniacki in two tight sets. The Danish 11th seed looked on course to take the match to a decider after securing a 5-3 lead in the second set, but lost the last four games as Li sealed a 7-5 7-5 success.