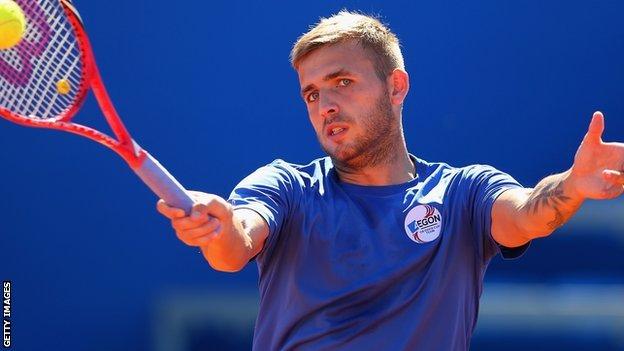 Dan Evans is in Britain's Davis Cup squad, alongside Andy Murray, for next week's quarter-final against Italy.

Evans is in good form, having reached his first ATP Tour semi-final last month at the Zagreb Indoors.

"James Ward and Dan Evans may not know who will be asked to fill the second singles spot until next Thursday. They have just begun a four-day training camp on the National Tennis Centre's covered outdoor clay courts and will fly to Naples on Saturday to continue their preparations.

"Ward's brilliant win over Sam Querrey in the first round in San Diego has not been forgotten. He is more comfortable on clay, but Evans gave us a timely reminder of his talents with a run to the semi-finals of the ATP event in Zagreb.

"Ross Hutchins could yet be drafted into the team. It's tough on GB's number one doubles player Dom Inglot, but wonderful to see Hutchins involved just nine months after completing a gruelling course of chemotherapy."

Colin Fleming has been named as Murray's doubles partner, while Ross Hutchins will travel to Naples as a reserve for the tie.

"The number two singles spot is open," said Smith. "Both Dan and James have had good moments this year. That's why I want to see how they perform over the next 10 days of training."

Evans, ranked 127 in the world, played in the victories over Russia and Croatia last year, winning one of his three live singles rubbers.

The 23-year-old also made a breakthrough by reaching the third round of the US Open in September.

He was left out of the Davis Cup team that beat the United States last month but in February became the first British man, aside from Murray, to reach an ATP semi-final since Ward in 2011.

Smith's team reached the last eight for the first time in 28 years when they beat the United States in February. It was their first win over the Americans since 1935.

The tie takes place on clay from 4-6 April and will feature Italy's top two players, Fabio Fognini and Andreas Seppi. They are ranked 14th and 33rd respectively and both men favour clay.

"It will be a good challenge," said Murray. "They have some very good clay-court players with a passionate crowd behind them.

"It will be a tough weekend and the games will be tight, but it's great playing in big matches like this in the World Group."

Murray announced last week that he has after two years together, and Smith has been among the names linked to the vacant position.

"It's obviously very flattering, but the most important thing for Andy is just to take time, think about what he wants to do and what he needs with his team," said Smith.

"What I would say is that he already has a very, very good team in place. People often forget the work that Dani Vallverdu does - maybe because it's a little bit under the radar - but he's a very good coach in his own right and he'll be able to work with Andy as a head coach.

"Whether it's in the short term or the long term, he could do that, but if Andy feels he needs to bring another person in, so be it."