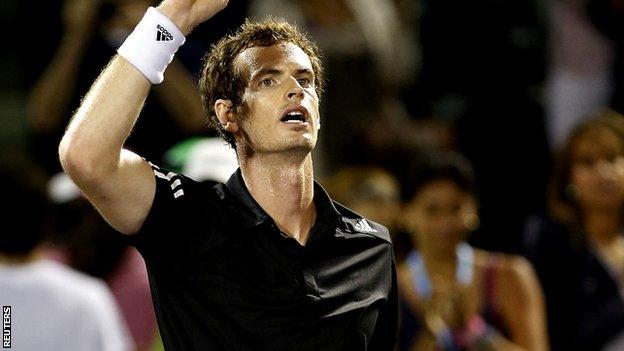 Defending champion Andy Murray came from a set down to beat Australian Matthew Ebden and earn a place in round three of the Sony Open in Miami.

In his first match since splitting with coach Ivan Lendl, the British number one went 3-0 down and lost the first set, but rallied to win 3-6 6-0 6-1.

"Not having [Lendl] around will be tough, but I just need to get on with it and try to get back to playing my best tennis," Murray told Sky Sports.

Murray recovered from a slow start to win 12 of 13 games on his way to a comfortable victory, but threw his towel in frustration after Ebden, ranked number 67 in the world, broke his serve for a second time in the match at the start of the third set.

"It's not always about how you play or how calm you are," said Murray.

"I won the next six games after that so maybe it had nothing to do with it, maybe it helped. I just got on with it and won the match. You do what you do to win a match."

The 26-year-old Wimbledon champion will next play Spaniard Feliciano Lopez, against whom he has a 9-0 record including a 7-6 (7-2) 6-4 6-2 victory at the Australian Open in January.

Murray has won the Miami Masters event twice, in 2009 and 2012, but following back surgery last September he has slipped to six in the rankings and could fall further if he fails to defend the 1,000 points he gained from winning the title last year.

In the doubles, Britain's former Wimbledon champion Jonny Marray teamed up with Dutchman Robin Haase to beat Marin Cilic and Lukas Dlouhy 6-4 7-6 (7-4) in round one.