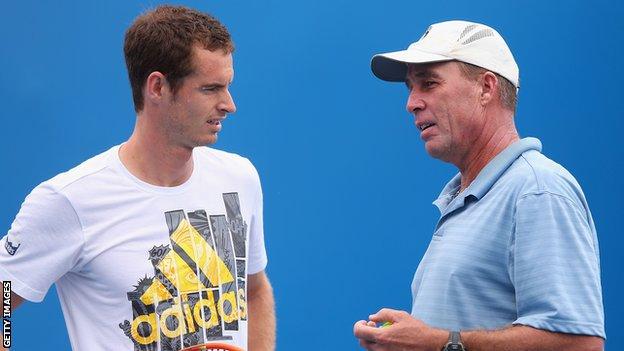 Andy Murray struck gold when he asked Ivan Lendl to be his coach, and it's unfortunate they are going their separate ways when there is so much more to be mined.

They were the unlikely couple who inadvertently spawned the era of the super-coach. Like Murray, Lendl knew exactly how it felt to lose your first four Grand Slam finals.

He never said an enormous amount during training sessions but, through honesty and experience, helped Murray convert his extraordinary ability and drive into Grand Slam titles.

Many coaching relationships last significantly less than two and a quarter years - Maria Sharapova and Jimmy Connors chalked up one match together - but the timing of this announcement is not at all ideal.

Names in the hat

Darren Cahill: Worked with Murray on the Adidas development programme

Like Murray, Lendl won his first two Grand Slam titles in his mid-20s but then unearthed the secret of winning six more in the following five years.

His input would have been invaluable to Murray as he adapts to life as a Wimbledon champion and tries to play his way through a mediocre spell of form since September's back surgery.

Lendl's desire is to play more and coach less: too little for the amount of time Murray feels he requires. The eight-time Grand Slam champion will always be a supportive voice - as former coaches Mark Petchey and Miles Maclagan have also been - but will not be on hand to guide Murray through a potentially tricky year.

Murray told me he had "no real explanation" for the way he played when he lost to Milos Raonic in the fourth round in Indian Wells last week. He hinted at a lack of confidence and even bemusement that - despite being match fit - he is unable to rediscover the form of last summer.

His world ranking of six may also start to trouble him soon because as the defending champion in Miami this week, it's likely to fall before it starts to rise.

John McEnroe's tally of seven Grand Slam titles puts him among the all-time greats. He won them all by the age of 25 and admits he then found it hard to find the next gear.

When we chatted in Indian Wells last weekend, he explained what Murray might now be going through.

"[It's tough] to win Wimbledon, the Olympics and the [US] Open in one year basically, and then be able to put that aside and say, all right, now I've got to train even harder because all of a sudden people are going to say 'why can't he win eight Grand Slams?'

"He's got two now so therefore he should win one or two a year and he'd better do it, or else it's considered unacceptable.

"And he just hasn't been able in my mind to get out of that. I wouldn't call it a funk, but just sort of finding that inspiration again."

So who does Murray turn to for help? To Dani Vallverdu, first of all.

The Venezuelan has a low-profile but hugely important role in Murray's team. He is, to all intents and purposes, a full-time travelling coach and a very close friend from their time together at the Sanchez-Casal Academy in Barcelona.

Vallverdu - with some assistance from Alex Corretja and Darren Cahill - was effectively running the show for the 18 months between Miles Maclagan's departure and Lendl's arrival, and his presence allows Murray time to consider his options carefully.

He is not someone who will be panicked into a hasty and possibly unwise decision, and some on the tour believe that at Murray's age he doesn't need any further additions to his squad.

I think he would benefit from another voice at this pivotal stage of his career: someone not too close to him, yet able to inspire him to greater heights.

Murray once remarked that, early in their relationship, he used to try to impress Lendl in the way you would a new girlfriend, and his results and on-court demeanour were noticeably better when the Czech was present.

Any future coach also should be able to share Murray's sense of humour, and most crucially to understand the very exclusive world he inhabits.

That would not have to be another former Grand Slam champion, although of the few who have not been snapped up, Mats Wilander would be an excellent choice.

Murray has spoken highly in the past of Darren Cahill, who he worked with as part of the Adidas development programme, Roger Rasheed (who now looks to be doing a great job with Grigor Dimitrov) and Bob Brett, the former coach of Boris Becker and Goran Ivanisevic.

An appointment is not urgent, but Murray is well aware that life at the top of professional sport can be brutally short.