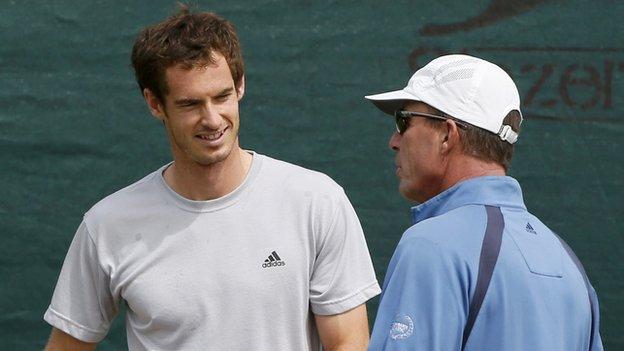 British number one Andy Murray and coach Ivan Lendl have agreed to end their two-year partnership.

Under Lendl, Murray won his maiden Grand Slam at the 2012 US Open,Olympic gold and last year's Wimbledon.

"I'm eternally grateful to Ivan for all his hard work," said Murray, 26. "We've learned a lot as a team and it will be of benefit in the future."

Lendl said it was time to "concentrate on some of my own projects, including playing more events around the world".

The Czech-born coach, who has recently played exhibition matches in the United States and London, added: "Working with Andy over the last two years has been a fantastic experience. He is a first-class guy."

Murray, who is in Miami to defend his title at the Masters Series event, said he planned to take some time before considering his next step.

"This is news which has taken everyone by surprise. Murray has thrived under the guidance of Lendl, who told the BBC at the end of 2012 that he could see himself coaching the Wimbledon champion until the end of his career.

"This is not a decision which has been taken overnight. With Lendl wanting to play more senior and exhibition events, it appears he is no longer able to commit to the number of weeks Murray needs him for.

"Coaches come and go - Jimmy Connors only lasted one match with Maria Sharapova - but this is a big loss to Murray as he tries to recapture the form of last summer. They didn't seem an obvious match at first, but a strong rapport developed as Lendl unlocked Murray's Grand Slam winning potential."

Lendl, an eight-time Grand Slam champion, was appointed Murray's coach in December 2011 with the aim of bringing the "experience and knowledge that few others have, particularly in major tournaments".

Prior to his partnership with Lendl, Murray had worked with the likes of Leon Smith, Mark Petchey, Brad Gilbert, Miles Maclagan and Alex Corretja.

The Scot had lost his first four Grand Slam finals before teaming up with the Czech.

In their first year together, Murray beat Roger Federer in the Olympic final at London 2012 before defeating Novak Djokovic to win the 2012 US Open.

Murray then ended a 77-year wait for a British men's singles champion at Wimbledon the following year with another victory against Djokovic.

"He's made me learn more from the losses than I did before and he's always been very honest with me and believed in me when other people maybe didn't," Murray said of Lendl after his Wimbledon win.

"Ivan's been very patient, as I'm not always easy to deal with. He's also honest with me. If I work hard he's happy, if I don't he's disappointed and he'll tell me. He has got me mentally slightly different going into these big matches."

Lendl, 54, is rated as one of the world's greatest players, having won 94 ATP Tour titles in a 16-year career.

He came from two sets to love down to win the French Open final against John McEnroe in 1984 to claim his first Grand Slam and, after winning the 1985 US Open, he remained as the world's top ranked player for 156 consecutive weeks.

Lendl added: "I will always be in Andy's corner and wish him nothing but great success as he, too, goes into a new phase of his career."