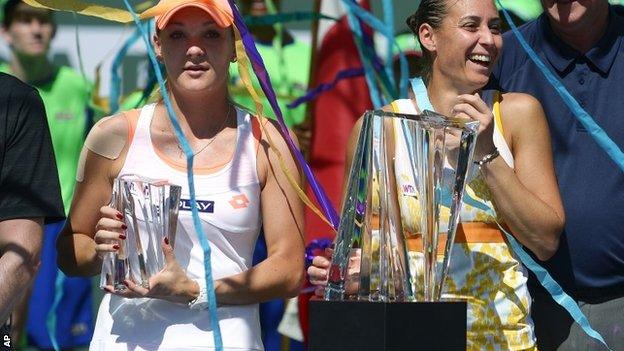 The 20th seed was aided by the Pole's knee injury that required a lengthy medical time-out in the second set.

Pennetta, who will climb to 12th in the rankings, wrapped it up with six games in a row after an hour and 13 minutes.

"It's incredible, something amazing," said Pennetta, on her first WTA title since 2010.

"The first set was I think pretty good. I tried to go for winners. Second set, I see she has a physical problem and I started thinking too much."

Pennetta, who had beaten world number two Li Na in the semi-finals, struggled with both a back and wrist injury after 2010, dropping as low as 166th in the world.

She was considering retirement before reaching the semi-finals of the US Open last year.

"The feeling and everything was so bad," she added. "And now, after one year, we have the trophy."

World number three Radwanska, 25, fought to hold back tears at the trophy presentation.

She said: "I think it's just the worst thing for a player to not give the 100%, especially in the final of the big event.

"And I just couldn't run as much as I normally do. Just bad luck."