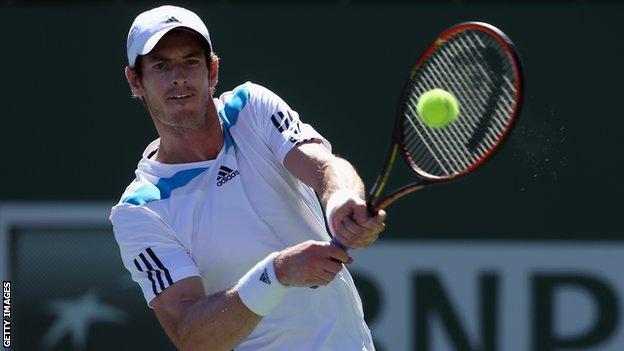 Britain's Andy Murray is out of the BNP Paribas Open at Indian Wells after he was beaten in three sets by 10th seed Milos Raonic in the fourth round.

The big-serving Canadian, 23, progressed to the last eight with a 4-6 7-5 6-3 win over the Wimbledon champion in California.

It is Raonic's third victory in four meetings with the British number one.

Raonic will face Rafael Nadal's conqueror Alexandr Dolgopolov of Ukraine in the quarter-finals.

Raonic threatened to overwhelm Murray early on with a serve that measured 140mph at times, but the Scot broke to love in the ninth after taking advantage of a double fault and a couple of unforced errors, before serving out the 10th to take the first set.

Raonic had a break point in the eighth game of the second set but Murray responded with an inch-perfect ace as he held serve.

The Canadian produced his best returning game of the match to earn three set points at 6-5 up.

Murray was able to save one, but he could not prevent Raonic levelling the match with a cross-court winner on the next.

For the first two sets, this was an instantly recognisable Murray. He was playing just the way we expect him to against another of the world's elite. But having gone a break up in the decider, his level dropped alarmingly and Raonic needed no second invitation to serve his way to victory.

Murray admitted afterwards it "clearly wasn't good enough" and is no longer using his back surgery as an excuse. He will have some hard work to do when he is reunited with coach Ivan Lendl in Miami later in the week.

Murray had looked frustrated in the second set, at one point arguing with the umpire over the positioning of the spider cam, but he soon regained his focus by breaking Raonic in the third game of the final set.

The world number six squandered the advantage in his next service game, broken to love as his second serve momentarily deserted him.

Raonic broke Murray for a second successive time to go 4-2 up, then held his next two service games to complete the victory in a little over two hours.

Murray admitted he is low on confidence and concerned about his form after dropping his serve twice in the deciding set.

"To get broken two consecutive times in that situation isn't good enough, he said. "I played poor tennis at that stage. I didn't make enough balls and missed easy shots."

He has lost to players outside the world top 10 four times in the five tournaments he has played since undergoing back surgery in September, but insists he is not struggling physically.

"Right now, I'm not pulling up after matches stiff or sore or anything like that, so I think I'm match fit and match tight," he said.

Murray's next tournament starts in Miami on 17 March, where he will attempt to defend his Sony Open title.