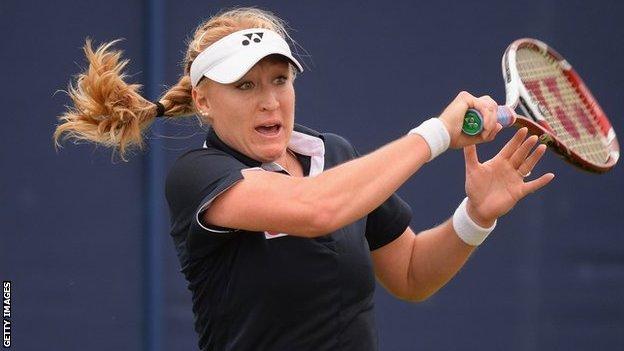 Andy Murray has spoken of his shock at learning Elena Baltacha has been diagnosed with liver cancer.

The Wimbledon champion was told the news by his mother Judy, coach of the British Fed Cup team.

Former British number one Baltacha, 30, said on Friday that she was undergoing treatment for the illness.

"I heard about it from my mum a couple of weeks ago - she'd gone in to see her in the hospital. You're obviously shocked to hear that," said Murray.

"I've known Bally for a long time. She's so young, she's just retired, you're expecting her to enjoy just a nice happy life.

"She's just got married as well so you feel bad. Life is very, very unfair," he added.

"I think she has the right attitude. My mum told me that she was unbelievably positive very soon after finding out."

Murray is keen to get involved in another Rally Against Cancer event this summer at Queen's Club and hopes Baltacha will do so as well.

He took part in the 2013 fundraiser after fellow player Ross Hutchins was diagnosed with Hodgkin's lymphoma.

"I'm sure this year, if we do the Rally Against Cancer, that's something that would be great to get Elena involved in at an early stage," said Murray.

"I believe that helped Ross a little bit as well, so maybe that would be a nice thing to do.

Murray, 26, was joined by coach Ivan Lendl and other tennis players and celebrities following the climax of the Aegon Championships last year.

The event was the brainchild of Hutchins and raised more than £275,000 for the Royal Marsden Hospital, where he received treatment.

Hutchins, 29, underwent a course of chemotherapy and was told he was in remission in July before returning to action in January.