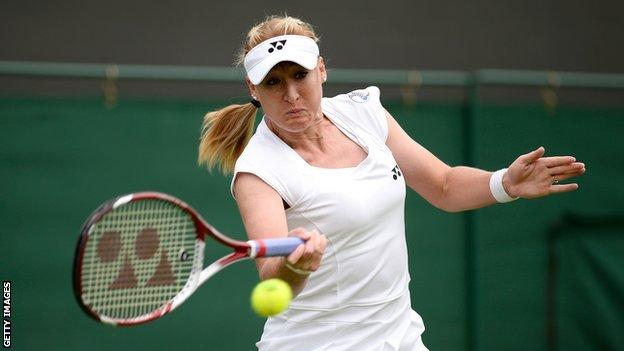 Former British tennis number one Elena Baltacha has been diagnosed with cancer of the liver.

Baltacha, who retired last year, won 11 singles titles, made the third round of Wimbledon in 2002 and was part of Great Britain's Fed Cup team for 11 years.

"I'm currently undergoing treatment and fighting this illness with everything I have," said Ukraine-born Baltacha, 30.

Fed Cup captain Judy Murray added: "She's a determined, upbeat person and everyone around her is positive".

At the age of 19, Baltacha was diagnosed with primary sclerosing cholangitis, a chronic liver condition which compromises the immune system.

The Scot went on to reach a career-high ranking of 49 in 2010, and also reached the third round of the Australian Open in 2005 and 2010, but often struggled with injury and illness.

Announcing her retirement last November, she revealed she planned to dedicate herself to coaching and developing the academy she founded in 2012 with her coach Nino Severino.

"I still absolutely love tennis and I want to take that passion and put it into learning to be the best coach I can be so that I can take all my experiences as a player and use that to help develop the next generation of British tennis players," she said.

The British number three said: "It's horrible news to hear and all of us are thinking of her.

"It's a shock to hear and I hope she has a good speedy recovery.

"Bally's a great spirit for Fed Cup and we all enjoy having her around, and all of us girls at the Fed Cup get along so well, so we'll all be thinking of her."

For several years Baltacha and Anne Keothavong were at the forefront of the women's game in Britain.

Keothavong, who retired in July 2013, sent a message of support to her old rival via Twitter.

Current British number one Laura Robson tweeted: "Sending so many positive vibes your way Bally! You've got this xx."

Stacey Allaster, the chairman and chief executive of the WTA, added: "Throughout her tennis career, Elena was admired for her friendly personality, her passion, energy and tenacity.

"We know she will use these qualities to fight this illness and we'll support her along this process in any way we can."

Baltacha can look for inspiration to Great Britain Davis Cup player Ross Hutchins, who was appointed the new tournament director of the Queen's Club's Aegon Championships in London this week.

The 29-year-old had returned to action earlier this year with doubles partner Colin Fleming after recovering from Hodgkin's lymphoma - another form of cancer.

Hutchins was diagnosed with the illness in December 2012 but announced he was in remission in July.