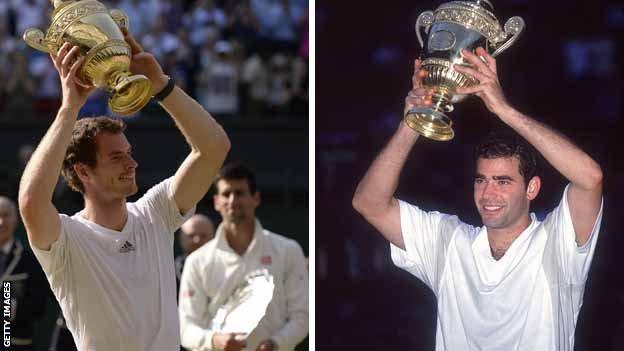 Briton Andy Murray will find it harder to defend his Wimbledon crown than he did to win it in the first place, thinks seven-time champion Pete Sampras.

The American told BBC Radio 5 live's Sportsweek: "When you defend a major it is the most pressure you could feel.

"You feel you are the man to beat - especially for Andy in England.

"He'll handle it fine, he is a great player and I think great players will figure it out."

The 42-year-old said Scotland's Murray, 26, "can contend... he is eager and healthy again [following back surgery at the end of 2013] and I think he will always be in the mix.

"He is on the way to winning multiple majors - it's hard to really put a number on it - but he is a great player. Wimbledon was a big one for him last year and he has come close a few other times."

Murray, who also won the US Open title and Olympic gold in 2012, beat Novak Djokovic in a thrilling straight-sets victory in last year's final to end Britain's 77-year wait for a men's singles champion at SW19.

But dealing with the pressure of trying to retain his Wimbledon title on home soil will be a new challenge for him, predicts Sampras.

"I think he is going to be talked about, just like he was last year, but before he was more of a contender, now he is the favourite," he said.

When asked whether he intended to move into coaching, Sampras - who revealed he did not pick up a tennis racquet for four years after he retired following the 2003 US Open before returning to play in a few exhibition events - was adamant.

"I'm not so keen on the travel and the lifestyle - it's not for me. I don't miss the pressure of the tour, the life," he insisted.