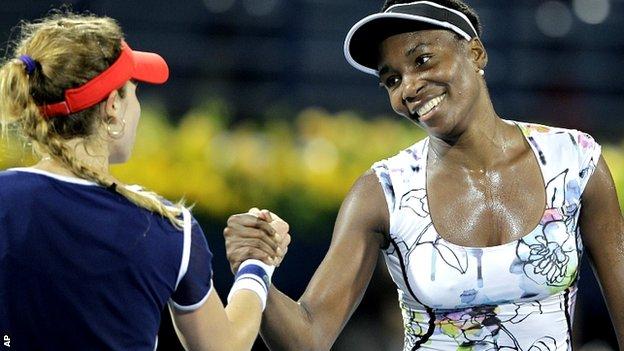 The 33-year-old American, now down at 44 in the world rankings, gained revenge for her sister and world number one Serena, who suffered a semi-final defeat by the Frenchwoman on Friday.

Venus used all of her experience to record a 6-3 6-0 victory against the world number 26 in Saturday's final.

This was her first WTA Tour title since she won in Luxembourg in October 2012.

Dubai is a happy hunting ground for the seven-times Grand Slam champion - this win follows those in 2009 and 2010.

"It's great to be back," said Williams. "I was expecting to be playing Serena, but Alize played an amazing game in the semis, so congratulations on that.

Referring to the immune deficiency which has threatened her career in recent years, she added: "I have continued being able to practise, and I have been getting healthier.

"It hasn't been easy. I have to thank the tournament for a wild card, and my family and Serena for encouraging me. They all kept me up when I was down."

Cornet's impressive victory over Serena in the last four means the Williams sisters have still not met in a final since 2009.

Venus was not in a mood to join her sister in defeat, however, and beat the 24-year-old Frenchwoman in a match lasting 91 minutes.

Key to the victory - her 45th on the WTA Tour - was the fact she converted five of eight break points against the Cornet serve, while her French opponent only took advantage of one out of six such opportunities to come her way.

Cornet, hugging the baseline just as she did against Serena, claimed the first break of the match, however, to go 2-1 up.

But Williams responded with a brutal barrage of ground-strokes for a double break and a 5-2 lead.

She served out for the first set and picked up another double break at the start of the second before sealing victory when Cornet lofted a forehand long.

Cornet said: "6-3 6-0 is a bit tough in an hour and 30 [minutes], so I guess there was a battle on the court, but she was just better than me - that's it, really there's nothing else to say. Venus played well the whole week and deserves this title."