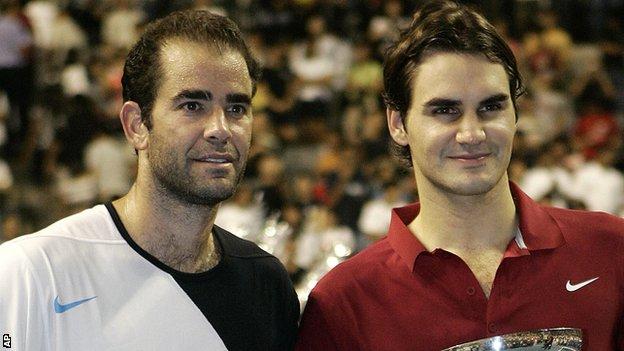 The American and Swiss have both won it seven times - the most in the Open era.

But the last of 32-year-old Federer's record 17 Grand Slam titles was at the All England Club in 2012.

A poor 2013 led some to write Federer off, but Sampras, 42, said: "As long as he is enjoying it and he's healthy, I can see him playing for two [to] four more years. He truly loves the sport."

The back problems that dogged Federer last year appear to be over, for now at least, while he has got to grips with a new, bigger-headed racquet and is enjoying working with part-time coach and boyhood hero Stefan Edberg.

He showed vintage form in defeating Jo-Wilfried Tsonga and Andy Murray to reach the semi-finals of the Australian Open before an all-too familiar defeat by Rafael Nadal.

Sampras was in Melbourne for that semi-final, and was encouraged by what he saw from Federer, who will return to action next week in Dubai.

The American said: "I thought his level (in Australia) was quite good. When you're playing against Rafa and if you're not quite on your game then it can seem like you're struggling. Rafa's a rock.

"But I do see Roger building from that, I think he's going to do well this year.

"Things need to fall into place and he needs to play well but I do think he can do it (win a Grand Slam). I think it is what he's playing for."

Federer has stated his intention to play on at least until the Rio Olympics in 2016, by which time he will be 35.

Sampras retired at 31 after winning his 14th Grand Slam title at the US Open in 2002.

He said of Federer's longevity: "He's done everything in the game and he could walk away feeling great but he still wants to travel and compete and I'm in awe of it.

"Clearly the majors are his motivation but he's happy to still travel and play the other events. I found myself getting tired at 30 or 31."