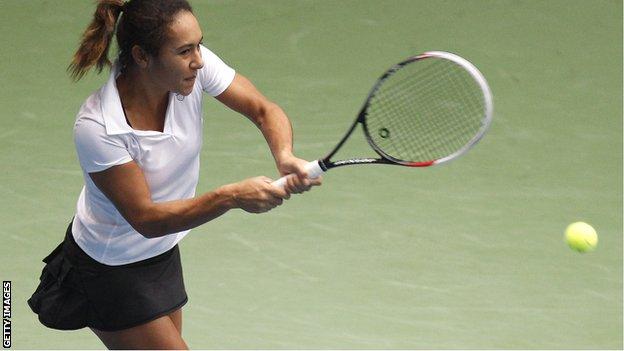 Heather Watson continued her bright start to 2014 by winning a second-tier tournament in the United States.

The 21-year-old British number three beat Russia's Ksenia Pervak 6-4 6-0 in the Michigan final to extend her unbeaten run to nine matches since the Australian Open.

Her win in the ITF event in Midland comes after four straight Fed Cup victories for Great Britain last week.

Watson should now rise about 40 places from her current world ranking of 161.

The Guernsey player, who had not dropped a single set in Michigan, got off to a bad start against Pervak in Sunday's final and trailed 4-1 in the opening set.

But a run of 11 games in a row saw her clinch victory in one of the biggest tournaments on the ITF circuit.

Watson, who endured a miserable 2013 as she battled to shrug off the effects of glandular fever, also won the doubles tournament in Michigan with partner Anna Tatishvili, beating second seeds Sharon Fichman and Maria Sanchez 7-5 5-7 10-6.